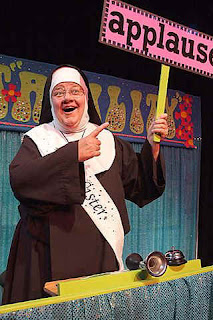 It’s difficult to know quite how to review the improvisational comedy “Late Night Catechism: Till Death Do Us Part,” which has replaced “Forever Plaid” at California Musical Theater’s Cosmopolitan Cabaret at 1000 K Street in downtown Sacramento.

The one-woman show was written by Maripat Donovan, who will be playing the role of “Sister,” a nun teaching an adult catechism class, for the first two weeks of the 8-week run, before she is replaced by Nonie Newton-Breen, who has spent the last seven years touring the country in “Catechism” plays.

Donovan created the original "Late Night Catechism" with director Marc Silvia 17 years ago to perform in a little Chicago storefront theater. Then it was 50-minute one-act, which played at 11 p.m. Over the ensuing years, Donovan has continued to hone her material and the play is now a 2 hour 2-act play.

We were the perfect group to see this play. There were three of us. Two of us were Catholics, one (myself) had gone to 12 years of Catholic school. The third in our party was neither a Catholic, nor had much experience of Catholicism.

From the moment I entered the cabaret, I felt I was back in grammar school again, with the Palmer method alphabet posted on top of the blackboard, the pictures of presidents and holy figures on the walls, the “JMJ” (for “Jesus, Mary, Joseph”) written across the top of the blackboard itself, the statue of Mary on a little table and crucifix hanging on the wall, and all the trappings of a Catholic school classroom.

“Sister” was a familiar figure too, a generously proportioned woman with a no-nonsense swagger, her rosary swaying at her side as she walked, and the stern look in her eye as she glared over her glasses at the audience and commanded us all to be quiet. I wanted to say “Yes, Sister.” I felt as if I was back in fourth grade and Sister Mary Johnetta had just caught me whispering to another classmate.

The show itself is a mixture of prepared material and ad-lib material, based on responses she gets from the audience (this is a show which is heavy on audience participation). Of necessity, the feel of the show will change every night, depending on the response (or lack of same) that Sister receives. The opening night audience was receptive.

Asked questions directly from the old Baltimore Catechism that every Catholic school child had to memorize throughout his or her years in Catholic school, it was surprising the number of people in the audience who could pop up and recite the correct answer, word for word.

While the prepared material was funny, some of it, the ad lib material was much funnier, but could be deadly dull with an unresponsive audience.

But at intermission, our group compared notes. While we catholics had found the thing funny, the non-Catholic said that, having no experience with Catholic teaching, the humor was just not hitting him. He later spoke with a Jewish man who said the same thing.

There are lots of laughs to be had which don’t require a Catholic education, but some that fall really flat. The “class” is supposed to cover the two sacraments of Marriage and “Blessing of the Sick” (called, in my day, “Extreme Unction”). While the marriage segment was very funny, there were few laughs to be found in the segment on blessing of the sick, no audience participation and I felt the whole thing fell flat.

That part of the “class” started Act 2, which then, for some unexplainable reason, morphed into “The Compatibility Game” where two couples were brought on stage, to the theme music for “The Dating Game” and asked an overly long set of questions to determine their compatibility.

While the couples (especially the older couple, Walter and his wife Theresa) were great, the questions went on so long that even “Sister” seemed to get bored with them. My feeling was that the whole show would have been much funnier if it had remained a 50 minute show and cut out the whole game show idea entirely.

Trying to sum up my feelings about the show are difficult because I “got” all the Catholic humor and loved it, but I can see that if you have never heard of the Baltimore Catechism the humor would just not be there.

I also feel that this would be much better as a one-act show, and if the game show were to be kept in, tighten it up significantly.

Bottom line is that I enjoyed it more than I expected to, but I don’t think this is a show that is going to be everyone’s cup of tea.

(And speaking of tea, be prepared for astronomical prices for cabaret refreshment. My small bottle of water cost $4! Others at our table bought something called “waffle fries” for around $5, which was about 2 cups [if that] of fancy looking potato chips!)
Posted by Bev Sykes at 6:24 PM