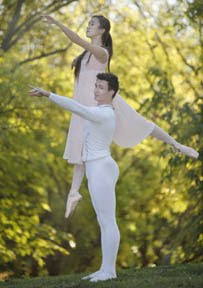 Ask most Davis folks about 'The Nutcracker,' and they'll probably assume you're discussing the 'Davis Children's Nutcracker': the city-run extravaganza that offers some 200 children an opportunity to rehearse and perform something that vaguely resembles Tchaikovsky's fairy-tale ballet.

Very few people will wonder if you're actually talking about the Mikhail Baryshnikov version of the classic ballet, presented by the students of Hanneke Lohse each year on the weekend following Thanksgiving, even though this also has been a Davis tradition for more than 20 years.

'It's too bad people don't realize how high a level we have here,' Lohse said. 'The kids have so much pride in it.'

The kids aren't the only ones who have 'much pride.' Lohse glows as she talks about her ballet company and about her productions.

'They all become my kids,' she said, as she recalled dancers, current and past, who've been with her for years. Some return either to dance or to bring their children for lessons, or just to see how the company has grown over the years.

Lohse knows her dancers well, and has taken on the role of Mother Confessor to more than a few of them over the years, significantly altering the lives of many. ('She's Dr. Hanneke,' joked husband Gary Lohse.)

But Lohse's 'Nutcracker production,' featuring as many as 65 dancers, isn't limited to children, although she'll start them as young as age 4.

'She's had 80-year-old dancers in 'The Nutcracker,' ' Gary Lohse continued. He builds sets, schleps costumes, buys equipment and beams with pride when he watches his wife talk about her ballets.

'I have a guy who's an Italian or French professor at Sacramento State University, who dances in it,' Hanneke said.

'There's a professor of statistics at UC Davis. One guy used to be a professional dancer with the San Francisco Ballet. One guy drives in from Roseville to dance with us.'

She also teaches a class for adult women, some of whom used to be dancers.

'These women are so gung ho about ballet that they're on pointe shoes. Some of them had been on pointe when they were younger, but had bad experiences and now are having great experiences.'

This year, she's particularly excited about a former student, 29-year-old Tim Nutter ('He's awesome!'), who is returning to dance the lead role with Sarah Bolander ('She's getting quite a following.') and Kaitlin Coppinger.

In addition to the more professional dancers, Lohse involves the parents of her younger children on stage. She pointed them out as we watched a videotape of the production.

'See how little these guys are? But they know exactly what they're doing. The thing that's so neat is that these parents are actually guardians of the little kids. You can see how the parents are actively guarding the children, so these kids are getting the best experience.

'Some of them are only 4 years old, but they know exactly what they're doing. These are all people who aren't dancers. Some just want to be in it.'

Lohse is the ballet company. When she first began to teach ballet at the Davis Art Center, she asked parents to make costumes. The quality varied greatly; some parents, who couldn't sew, had to find someone else to make the costumes.

Lohse eventually decided that she could sew, and it would be easier and more convenient if she just made all the costumes herself, with the help of some parents also comfortable with needle and thread.

'We go to fabric discount store,' Lohse said, 'buy 60 yards of fabric and make all the costumes. They're all uniform. I design and cut the patterns, and some of the moms sit at sewing machines with sergers, so they're done in no time.

'The serger is the race car of sewing machines!'

Lohse has costumes for five different ballets. When I asked where she stores that many costumes, Gary chimed in: 'We have two shipping containers, 8 feet wide by 20 feet long. The costumes are double-hung.'

OK, but where do you store two huge shipping containers?

Gary explained that they lived on five acres in unincorporated Solano County, and have plenty of land on which to store the containers.

'I sometimes say I'm going to retire tomorrow,' Hanneke said. 'That's when I'm tired. And then I'm away from it for 10 days, and I can't wait until I get back to the kids. We have a home in the Blue Ridge Mountains. When I'm tired, I disappear. I go to North Carolina and just sit in the woods and read.

'Sometimes I want to retire, because I learned how to spin and weave and I love to do things with my hands, but then I miss the kids: the little kids and the older kids.

'I even love the adults.'

It's clear that 'retirement' isn't in the foreseeable future for this human dynamo. It's also clear that Hanneke Lohse's 'Nutcracker' may be one of the best-kept secrets in Davis.

For those seeking a professional-quality 'Nutcracker' this season - and those who would prefer not to pay the higher prices found in San Francisco or Sacramento - it isn't necessary to look any farther than your own back yard.

That's where you'll find this first-rate, professional version of 'The Nutcracker.'
Posted by Bev Sykes at 7:52 AM

Once again I'm proud to say that my wife will be dancing a small role this year, my daughter several larger roles.

I'd like to add some special applause for Hanneke, who is a total dear, and under whose tutelage my brave wife learned to dance en pointe whilst undergoing chemotherapy.

It's enormous fun to see all these kids-of-all-ages dancing their hearts out; it is truly a highlight of the year.