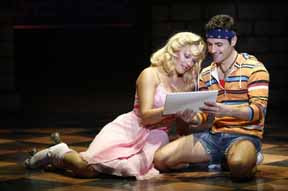 Very good movie musicals have been adapted for the stage: 'Mary Poppins,' 'Beauty and the Beast' and 'The Lion King' come to mind.

And some equally fine stage musicals - such as 'My Fair Lady,' 'The Music Man' and 'Oklahoma!' - have been brought to the big screen.

But why would anybody want to take the 1980 Olivia Newton-John/Gene Kelly movie, 'Xanadu' - perhaps the very worst movie musical ever made (or if not the worst, definitely one of the worst) - and put it on the stage? One wonders what Douglas Carter Beane, Jeff Lynne and John Farrar ate the night before this crazy idea came into their heads, I assume in some strange dream.

What were producers Robert Ahrens, Dan Vickery, Mickey Liddel and Tara Smith drinking, when they agreed to put up the money to produce the show?

And what was California Musical Theatre thinking, when it booked the show into this year's season?

The thin plot revolves around Sonny (Max Von Essen), a struggling artist, and Kira (Elizabeth Stanley), the muse who steps out of one of his graffiti drawings, determined to help him achieve the greatest artistic creation of all time: the world's first roller disco. (Hey, it is 1980.)

The secret of the stage show's success seems to be that it doesn't make any apologies for the abominable movie on which it's based. This production revels in it, and spoofs it constantly. (At the show's conclusion, for example, Kira is sent to live on Earth forever ... speaking with an Australian accent!)

Earlier on, Kira has stepped out of a brick wall along with several other muses. Two of them, Melpomene and Calliope, become jealous of Kira's deepening feelings for Sonny, and they stir up all sorts of trouble.

Melpomene was played on opening night by Amy Goldberger, a last-minute substitute for the ailing Natasha Yvette Williams. I don't know what Willliams' performance would have been like, but Goldberger was outstanding, giving one of the evening's most memorable performances.

Annie Golden is a very cute, if conniving, Calliope.

Larry Marshall plays Danny Maguire (later Zeus), owner of the theater Sonny wants to renovate; oddly, Danny seems to have his own memories of Kira.

This production, like so many others at Sacramento's Civic Center Theater, is plagued by sound problems. The decision to crank the sound up so loud distorts not only the songs - I don't think I understood a single lyric other than 'Xanadu' and 'Magic' the entire evening - but also the dialogue.

Fortunately, if you pick up a sentence here and there, the plot isn't that difficult to follow.

In addition to the overly loud amplification, the sound cut in and out periodically, sometimes leaving the actors reciting lines that couldn't be heard beyond the first few rows.

'Xanadu' seems to be a show that you'll either love or hate: no middle road. Fortunately, the Sacramento audience seemed to have a great time.

If you loved disco - and enjoy clapping along with bouncy tunes you can't understand - you'll probably love 'Xanadu.' It's a feel-good show, long on escapist entertainment and short on plot.

And even if you hate it, it runs a brief 90 minutes in a single act, so you'll be home early.
Posted by Bev Sykes at 2:47 PM

I hate to be a nit-picker, but Xanadu was only nominated for all those Tony Awards. . .In the Heights won best musical that year.

Thanks for the correction, Sarah. I was reading from the press kit I received, but may have mis-read.