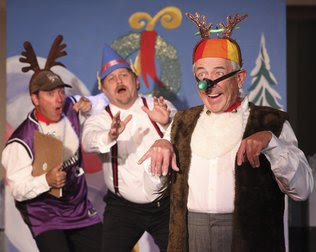 Capital Stage has brought back its delightful holiday gift, “Every Christmas Story Ever Told (and then some),” written by Michael Carleton, James Fitzgerald and John K. Alvarez and directed by Jonathan Williams. The show opened on Sunday at the Delta King Theater in Old Sacramento.

This year’s incarnation adds topical material such as Sarah Palin, Lindsay Lohan, and our Governator and it gives Wheeler a chance to do spot-on vocal impressions of Ray Romano and Tim Gunn.

(While these names may not immediately say “Christmas” to you, be assured that in context, they do.)

This 1-1/2 hour piece begins on a serious note, with Eric determined to read Dickens’ “A Christmas Carol,” only to face revolt by his cast, who are tired of doing the Christmas classic and want to pay homage to all of the other familiar Christmas shows and customs. Eric finally relents, on the condition that he also be allowed to perform the straight version of “A Christmas Carol” too.

Lights come up and the audience is called upon to shout out their favorite Christmas “thing,” whether carol, story, movie, or TV movie. It doesn’t stop at Christmas, but also gives a nod to Chanukah ("It bears similarities to other Jewish festivals: They tried to kill us. We survived. Let's eat!") and Kwanza ("The best part of Kwanza is that you'll never see a special called 'A Very Brady Kwanza'.")

Then the zaniness begins. From Gary’s favorite commercial, Santa Riding in on a Norelco shaver, to Eric as a reluctant, but hilarious Grinch, the trio begin to work their way through as many BHCs (Beloved Holiday Classics) as they can.

While two cast members are off stage getting ready for the next bit, the remaining one is standing on stage reading facts off of 3x5 cards about Christmas traditions around the world, such as the story of Holland’s “Sinterklaass,” who arrives on a steamer from Spain with his helper, a twisted dark gnome known as “Black Peter” who punishes bad children. (The writers seem to have looked for the darkest holiday traditions they could find.)

In act 2, Wheeler gives us another spot-on vocal imitation as Jimmy Stewart in makes a terrific “It’s a Wonderful Life,” and a hilarious Mr. Smithers (from “the Simpsons”) Scrooge in “A Christmas Carol.”

Mohrmann is particularly fetching, looking more like Carmen Miranda than the Ghost of Christmas Present and also is very funny as a Jim Lang-type host of the fruitcake version of “The Dating Game.”

I have now seen Gary S. Martinez in this show three times and I’m still in love with his character. He can be very funny and lovable, and he wins my heart each year when he stands there, as Linus, reciting “The True Meaning of Christmas.” It seems that each year I say that he’s the “heart” of this play–but he really is.

Just when you think the play is over, the cast realizes that they have left out Christmas music and give a dizzying rendition of Every Christmas Carol Ever Sung.

I promise you will leave this theater with a sprig of holly in your heart and a “Mata-Ki-Te-Rangi” (“Merry Christmas” in Icelandic) on your lips.
Posted by Bev Sykes at 7:18 AM