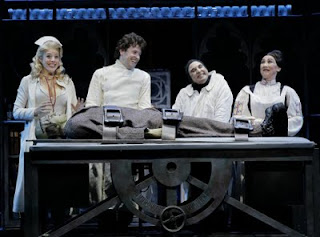 There is no mistaking a Mel Brooks musical. From the distinctive musical style to the off-color Catskill-esque humor (mostly involving male genitals), to the pompous soldier with the Hitler mustache to the leggy buxom blonds. It’s all there in “Young Frankenstein,” the current offering of the Broadway Sacramento series at the Community Center Theater.

“Young Frankenstein” is the musical which is based on the cult classic smash hit 1974 film of the same name. It reunites the production team of Mel Brooks (book, music and lyrics), Thomas Meehan (co-author of the book) and Susan Stroman (director and choreographer) who produced the wildly successful “The Producers,” also based on a movie by Brooks.

While “Young Frankenstein” does not match the cohesion of “The Producers” (which, at 12, won more Tony awards than any other show in history), and while much of its humor is lost to the muddle of the Community Center sound system, there is no denying that this show is a definite crowd pleaser.

The original Gene Wilder/Mel Brooks screenplay has been closely followed, and many of the songs are based on familiar lines from the movie (such as “Please Don’t Touch Me,” “Roll in the Hay” and “He Vas My Boyfriend”) and turned into full blown musical numbers. But the best musical number, by far, is by Irving Berlin: “Puttin’ on the Ritz” is done “straight” (or as straight as a duet between a scientist and a monster can be), and brings down the house when the duo are joined by the full cast, coming out in monster footwear and top hats, doing a kick-line, which never fails to win applause.

The corniness of the dialog is set early on when brilliant young scientist, Frederick Frankenstein (Franken-STEEN), having learned of the death of his famous relative, arrives by train on Track 29, and asks someone, “Pardon me, boy — is this the Transylvania station?” The tone is set for the rest of the show.

Christopher Ryan has the difficult task of making the iconic character of Frankenstein, so familiar to us from the Gene Wilder performance, his own. And he does. His Frankenstein is less of a mad scientist and more of an ordinary guy in unusual circumstances. He is likable more than zany, and his relationship with his assistant Inga (Synthia Link) is more that of two people in love than that of a lecherous man with an air-headed blonde. In fact, Inga herself is played more “straight” than off the wall, and her frisky foreplay in “Roll in the Hay” is very funny.

Frankenstein’s assistant, Igor (EYE-gore), is given a delicious portrayal by Cory English (who played the role on Broadway), who wants desperately to be scary, but who succeeds in just being cute.

Joanna Glushak is suitably creepy as Frau Blucher, the housekeeper of the elder Frankenstein’s castle, the very mention of whose name causes horses to shudder.

Janine Davita is deliciously over the top as Frederick’s narcissistic fiancee, who can’t be touched for fear of mussing her hair, make-up or freshly polished nails. All thoughts of untouchability, however, fly out the window when she meets the monster, who offers her “Deep Love” in the most suggestive song all evening.

As for the monster himself, Preston Truman Boyd is charming as he lurches his way around the stage trying to figure out who or what he is. He may be the most likable person in the cast. His scene with the blind hermit (David Benoit) displays his talent for physical comedy.

This is a show that seems to flow from corny joke to corny joke, many situations predictable, but that doesn’t detract from the enjoyment.

Costume designer William Ivey Long provides some of the most amazing costume changes you’ll ever see. Set Designer Robin Wagner manages to create the creepiness of a Transylvania castle with its dungeon of secrets.

“The Producers” it isn’t, but “Young Frankenstein” has its own appeal and is an enjoyable evening.
Posted by Bev Sykes at 1:41 PM