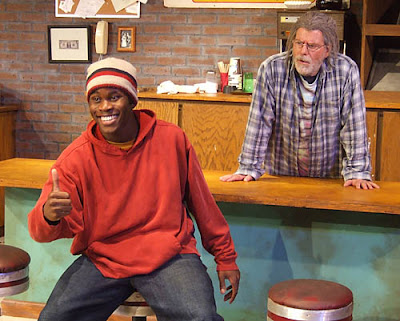 Director and Capital Stage co-founder Stephanie Gularte received a standing ovation before her production of “Superior Donuts,” by Tracy Letts, had even begun. Not only was it opening night for the play, it was the inaugural production for Capital Stage’s brand-new theater in midtown Sacramento.

Leaving the Delta King, their home since 2005, the company has built a charming performing space that is both larger and more intimate than the Delta King, with a bigger stage that will accommodate larger casts (nine in “Superior Donuts”), and with on-street parking easier to find than in Old Sacramento.

The standing ovation was well-deserved, but just the prelude of the special evening to follow.

The Letts play is a perfect first production for Capital Stage. It’s a little bit of everything — a comedy that’s not a comedy, a tragedy that’s not a tragedy, a character study of several disparate people all coming together in a family-owned doughnut shop in Uptown Chicago, which was already on the way down in 1950, when Arthur Przybyszewski’s immigrant parents bought it.

Matt Miller creates yet another memorable character as Arthur, an aging hippie who looks as beaten down as his doughnut shop. Over the course of the evening, we discover that Arthur was an embarrassment to his father, a member of the Polish Army, who spent most of the war in a POW camp. Arthur fled to Canada during the Vietnam war and is still haunted by his father calling him a coward.

As the show opens, Arthur’s shop has been vandalized, an act that seems to bother everyone else in the neighborhood more than it does Arthur, who takes it all in stride. He has withdrawn from life and is existing rather than living.

Young Franco Wicks (Jammy K. Bulaya), bursts through the door, applying for the job Arthur has advertised in the window. Arthur is uninterested in hiring anybody, but Franco is so excited about the possibilities, and wins Arthur over. He is hired and sets about to bring life back into the doughnut shop … and to Arthur.

Bulaya gives an amazing performance. He is ebullient and engaging, excited about life, determined not to let anything get him down. He has plans for his future and he has written the Great American Novel. His face would light up a room and you can’t help but smile when you look at him.

In contrast, his final scene is one of the most emotional and so beautifully played. It was an unforgettable experience.

The rapport between Arthur and Franco carries this story, as the old man is slowly shaken from his numbness by the younger man’s unflagging enthusiasm. The friendship they form is essential as the story progresses and their roles are reversed.

Arthur’s neighbor, Max (Gary Pannullo) is a Russian immigrant who owns the video store next door and who desperately wants to buy Arthur’s doughnut shop so he can expand and find his own American dream. Pannullo is just great, a stereotypical Russian — bombastic, argumentative, but a longtime loyal friend of Arthur’s.

The stellar cast also includes Janis Stevens, almost unrecognizable in her multi-layered costume as “Lady,” an alcoholic street woman who begins each day with a doughnut and a cup of coffee. Stevens gives this old woman an air of regal dignity, and her sharp wit delivers some of the funniest lines. She can’t seem to maintain her sobriety, but she keeps starting anew every day.

Lori Russo is Officer Randy Osteen, who obviously is attracted to Arthur, who doesn’t even know she exists until Franco points out that she has been trying to get the old man’s attention.

Anthony D’Juan plays the beat cop, Officer Bailey, a “Star Trek” fan who cares about the people in his neighborhood.

Barry Hubbard and Shane Edward Turner are Luther Flynn and Kevin Magee, who come to collect on Franco’s gambling debt.

Jeffrey Lloyd Heatherly is Max’s nephew, Kiril Ivakin, who has little to say, but makes his presence known very effectively.

The new Capital Stage theater is off to a very good start.