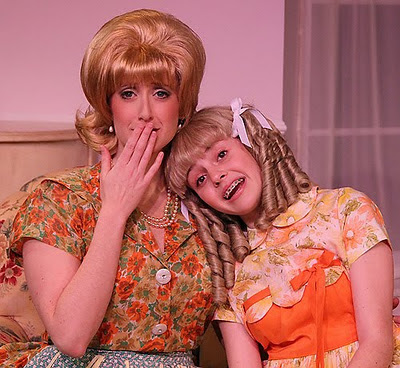 Fasten your seatbelts … it’s going to be a funny night.

Sacramento Theatre Company is presenting “Ruthless! — The Musical,” with book and lyrics by Joel Paley and (mostly forgettable) music by Marvin Laird, a spoof about all those “bad girl” movies like “The Bad Seed,” and “All About Eve” with a lot of Mama Rose from “Gypsy” thrown in.

As director Michael Laun says, “you don’t need to be familiar with some of the shows this musical spoofs to enjoy its backstage show business plot, … but those in the audience who know these shows will surely find some familiar themes, characters and plot points sprinkled throughout the evening.”

It would be a disservice to the show to give away the plot since part of the fun is watching it all unfold, but suffice to say that STC has assembled a wonderfully talented cast who get into their roles and play them to the hilt.

Andrea St. Clair is Judy Denmark, a housewife and mother, who freely admits she has no talent whatsoever except to be mother to little Tina, a child just like Baby June in “Gypsy,” with her bobbing curls and militantly adorable smile. Tina’s goal is to be a big star and she is willing to do anything to accomplish that goal.

The role of Tina is double-cast, and the night we saw the show it was played by Jillie Kate Randle (her alternate is Lauren Metzinger). Randle was so perfect, I almost expected her to do the splits while saying “Hi, my name is June … what’s yours?” This is an 11-year-old bundle of talent with an already long list of theater credits to her name. It will be fun to watch her as she grows older.

St. Clair, making her STC debut, is no slouch in the talent department either, continuing to display her considerable talents while professing to have no talent whatsoever.

“Talent” is at the heart of this show, as explained by the talent scout Sylvia St. Croix (Michael. RJ Campbell). “Where does it come from? Is it a product of one’s environment — something picked up on the street? Or is talent something you’re born with?…”

I’ve always been a fan of Campbell’s and he is deliciously overbearing in this pivotal role.

In the pre-show talk, director Laun explained that in the original production, the talent scout role was played by a man in drag and in subsequent productions it has been played by men as men, women as women and men as women.

Laun chose to go back to the original vision, and how lucky patrons are for it. Campbell does not disappoint, and his larger-than-life character is just perfect.

Becky Saunders, last seen at STC in “Six Dance Lessons in Six Weeks,” really gets a chance to shine in three different roles. She won my heart as the theater critic Lita Encore singing “I Hate Musicals.” (Though I love musicals, there is something every critic can relate to in that song, especially when she decries “keyboards” and longs for “real clarinets.”) Saunders is a very funny lady.

Rounding out the cast is Netty Carey as “Eve.” Can’t have a ruthless show without an Eve, now, can you? She also appears earlier in the show as the hapless Louise Lerman, a classmate of Tina’s.

Pianist Erik Daniells is offstage, but keeps things rolling along.

Jarrod Bodensteiner is the set designer and he literally does double duty, as there are two completely different sets (not an easy thing to accomplish on the small Pollock stage). There is a longer-than-normal intermission to allow for the changing of the set.

Laun keeps the madcap tale moving at a brisk pace, and sorting out all the plot twists is just part of the fun.