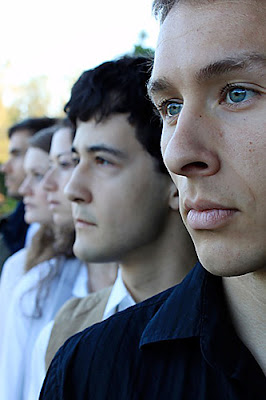 Before I went to review the Davis Shakespeare Ensemble’s production of "Henry V," I rented the Kenneth Branagh movie to get myself in the mood for seeing this epic play. The movie, of course, has a cast of thousands. And as Henry, bloodied but unbowed, wades through the field of bodies at the end of the Battle of Agincourt I wondered how in the world the young Davis group was going to pull it off with a cast of five, all of whom were making their Davis Shakespeare Ensemble debut.

Well, the answer to that question was: surprisingly well. This production, directed by Rob Salas, works because of an amazingly talented cast who each play many parts. Casey Worthington is Henry V and others; Mitchell VanLandingham is the Dauphin, Canterbury and others; Kevin Ganger is Exeter, Pistol, Charles, and others; Misty Day is Nell Quickly, Fluellen, and others; and Cody Ganger is Catherine, Bardolph, and others.

It also works because of the ingenious costume design by Maggie S. Chan, who has woven an intricate set of chains for each actor over which are laid sashes, capes, and other bits of costume to allow for instant transformation into the next character, whether a soldier, a townsman, or a king.

The close confines of the UC Davis Arboretum Gazebo make it possible for the slow motion battles, with real swords flashing uncomfortably close to the audience, yet always under close supervision by the actor, to actually give one the sense of being in a real battle. (And kudos to whoever painted the beautiful French and British shields).

No dialect coach is listed, but the ability to switch from English to French to a broad Scottish accent may seem effortless, but had to have taken great effort to bring it all off so seamlessly. (As a native American speaker, I can’t address the actual authenticity of the languages, but it sounded good to me!)

The story takes place at the death of Henry IV and the rise to the throne of his heretofore high living son, Henry V. The new king, not unlike the current Prince Harry, likes to party and has a reputation, though he surprises everyone by taking very seriously his new role as King. Having been assured by Canterbury (with extensive corroborative material) that England has the right to claim lands in France, because of Henry’s roots in the French royal family, the young king makes his intentions known.

The Dauphin responds with an insult in the form of tennis balls and, in reply, Henry announces that he will invade France. All culminates with Henry’s rousing St. Crispin’s day speech, the battle and the ultimate defeat of the French by the English (history records that some 8,000 French were killed, as compared to a few hundred English).

And, of course, there is a girl, the French Princess Catherine, who is wooed, and eventually won by the victorious Henry. The scene with Catherine and her maid, who is trying to teach the young Princess some words in English is very cute and a nice break from the heavier war plans.

If there was any downside to my evening at this Davis Shakespeare Ensemble production, it was an older British couple sitting nearby who talked and giggled throughout most of Act 2. Such behavior would be rude anywhere, but it was a terrible distraction in a venue as small as the Gazebo.

The Davis Shakespeare Ensemble has a real winner with this production, and what a nice way to spend a pleasantly warm evening in Davis. Spray on some mosquito repellant, though. I didn’t, and made a tasty meal for several mosquitos throughout the night.
Posted by Bev Sykes at 7:37 AM