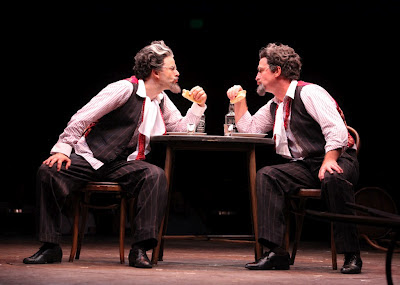 To describe “Crazy for You,” the final production in the 2012 Music Circus season, as “energetic” would be to do it a disservice. It goes beyond energetic.

When “Crazy for You” opened on Broadway in 1992, New York Times critic Frank Rich said the opening was “… the moment at which Broadway finally rose up to grab the musical back from the British.” He went on to describe the show as “the American musical’s classic blend of music, laughter, dancing, sentiment and showmanship with a freshness and confidence rarely seen during the ‘Cats’ decade.”

With music by George Gershwin and lyrics by Ira Gershwin, both of whom died before this show was developed, one could hardly call this a “new” show, musically. But Ken Ludwig, who wrote the book, called this a “new Gershwin musical comedy,” and Broadway fell in love with it. It was nominated for nine Tony Awards (and won three, including Best Musical and best choreography) and eight Drama Desk Awards (winning two, again Best Musical and best choreography).

In 1930 Ethel Merman starred in the first production of the George and Ira Gershwin musical, “Girl Crazy,” the story of a spoiled New York rich kid who learns about life , love and everything else on a Nevada dude ranch. In 1943, Judy Garland and Micky Rooney brought the story to the big screen, with choreography by the infamous Busby Berkeley.

In 1992, with the blessing of the Gershwin heirs, Ken Ludwig took another look at the old chestnut, did some extensive rewriting of the plot line, and produced “Crazy for You,” now delighting Music Circus audiences. Though Ludwig kept some of the original songs (most notably the first act finale, “I’ve Got Rhythm,” which is a show stopper) he also included other familiar songs from the Gershwin collection. The result is a show where every one of the 20 songs is a hit.

To match the material, director James Brennan has an all-star cast. Noah Racey (who may remind Davis residents of local song-and-dance man, Bob Bowen) is a great physical performer, whose body bends, quivers and contorts in ways you’d never imagine. He is in 11 different musical numbers, but his best moment may be in a “mirror scene.”

Anne Horak is the perfect Polly Baker, daughter of Everett (Paul Keith), hanging on to his deserted theater and remembering the glory days when his late wife graced its stage. Horak’s Polly is a feisty, independent woman stuck in a one-horse town but determined to take control of her life.

While the story centers on these two, there is a fine cast of supporting players including Matthew Shepard as Bela Zangler a famous theatrical producer in love with chorine Tess (Kim Arnett); Alix Korey is Bobby’s indomitable mother, Lottie Child; Robin Masella is Bobby’s overbearing fiancée Elaine.

The villain of the piece is Lank Hawkins (Aaron Serotsky), who owns the saloon next door to the theater and has his eye on expanding his own property. He also is sweet on Polly and sees Bobby as a threat to both of his plans.

The cowboy trio (straight out of “O Brother, Where Art Thou?”) are very funny, particularly Eric Gunhus, as the bearded Moose, who plays the bass like a guitar.

Choreography by Deanna L. Dys is outstanding, especially for the aforementioned “I Got Rhythm” and “Stiff Upper Lip.”

While the costumes by Marcy Froehlich are spectacular, especially for the big chorus numbers, right out of the Ziegfeld Follies, I was drawn even more to Polly’s dresses, which though somewhat plain in appearance had great “twirling” skirts and were perfect for all of her ensemble numbers with Bobby.

2012 has been a stellar year for The Music Circus, with exceptional productions and near full houses. With “Crazy for You” they are going out where they started — at the top of their game.
Posted by Bev Sykes at 6:41 PM

Labels: Crazy for You, Music Circus