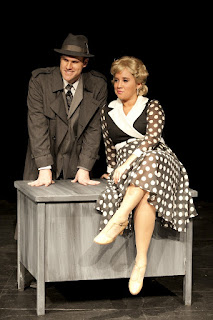 “City of Angels” is — producer Steve Isaacson boasts — the most technical show the Davis Musical Theatre Company has ever done.

The book for this comedy was written by Larry Gelbart (“M*A*S*H”), who has, not surprisingly, filled his story with double entendres and razor-sharp word play. Music is by Cy Coleman with lyrics by David Zippel. It tells the story of a screen writer in the 1940s working with a producer trying to get his script onto the screen. The production is directed by John Ewing.

There are two stories going on simultaneously, the “real” story in color, and the movie in black and white. Writer Stine (Tony Ruiz) is working with producer/director Buddy Fidler (Patrick Stratton) to bring his whodunit to the screen. And while Stine is working on his script, we see the pages come to life scene by scene, as he writes (and rewrites) it.

While Stine and his hero, private eye Stone (Tevye Ditter) are played by different actors, most of the rest of the cast have both a “color” role and a “black and white” role; e.g., Stine’s wife Gabby (Jennie Ribadeneira) becomes Bobbi, Stone’s ex-fiancee.

If one doesn’t know the premise before seeing the show, it may take a while to figure out what is going on, especially since this is a “wordy” show, and a great deal of it relies on voice-overs. Isaacson says there are 60 of them, mostly the voice of Stine narrating the action for Stone. Sadly, not all of them were clear or were drowned out by the orchestra, so we missed a lot of the story. It may be that they were more clear in other sections of the audience.

Some scenes work better than others. A black-and-white bedroom scene transforms into a color bedroom scene beautifully, for example. However, costumer Jean Henderson, who has made some gorgeous clothes for this show, must be taken to task for a couple of egregious errors. In an early scene, Stone arrives at his black-and-white office wearing his black-and-white clothes and his secretary is in black-and-white polka dots; then, he removes his black coat … which has a maroon lining! Likewise, the secretary Oolie (Caitland Martin, who is also Buddy’s secretary, Donna, in the color world) wears tan shoes in both.

However, these are minor points. The best thing about this show is that every actor is very strong and there are some outstanding performances.

Could there possibly be a better gumshoe than Tevye Ditter, with his Dick-Tracyesque jaw, his steely-eyed gaze and his demeanor that just screams “1940s detective”? Stone is hired by socialite Alaura Kingsley (Danielle Debow) to find her stepdaughter Mallory (Rebecca Wilson). What initially seemed like a simple plot gets more and more complicated as Stine keeps rewriting to keep up with the demands of producer Buddy Fidler.

Tony Ruiz’s Stine becomes increasingly frustrated with his studio clashes. His “Funny,” at the end of the show, was a highlight.

Patrick Stratton, returning after a theatrical hiatus, is perfect as Buddy (and the movie mogul Irwin S. Irving, in the black-and-white world). Stratton delivers some of the show’s funniest lines, reminiscent of the malaprops of Yogi Berra (“You don’t get a hole in one your first time at bat.”). His comic timing is just perfect.

Jean Riradeneira singing her torch song, “With Every Breath I Take,” is absolutely stunning, both visually and vocally.

Caitlin Martin, as Stone’s “Girl Friday” Oolie and Stine’s girlfriend Donna, is the classic street-smart woman who is always a pal but never gets the guy. Martin does a great job with the song, “You Can Always Count on Me.”

Joshua Smith has the small but ultimately pivotal role of Jimmy Powers, a movie crooner in both real and movie world.

Jimmy is backed up by the “Angel City Four,” a quartet in the style of the Manhattan Transfer nicely handled by Wendy Young Carey, Christine Gross, Douglas Barbieri and Adam Sartain.

Whenever DMTC does a show that is rarely done, such as “City of Angels,” the top local talent shows up for the chance to participate. This production is no exception and the show is worth seeing for the outstanding ensemble.
Posted by Bev Sykes at 12:55 PM