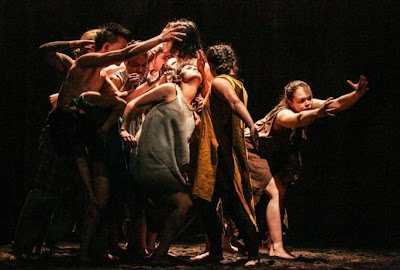 “Flash: A New Choreography” is the latest work created and choreographed by Qudus Onikeku, UC Davis Granada Artist-in-Residence and preeminent performance artist known for his Yoruba culture-based choreography that fuses together movement philosophies of hip-hop, capoeira and Nigerian masquerade tradition.

Onikeku’s poetic and multidisciplinary attempt to present painful memories runs through Sunday at the Main Theatre in  Wright Hall at UCD.

“All my work as a creative artist has been a series of possibilities of responding to issues that affect me primarily, and those that affect the permanent human values which I defend,” Onikeku said. “I know that my audience is not particularly concerned with these matters before coming to the theater, so it then becomes my responsibility to find other interesting and spectacular ways of reaching out and communicating.”

Onikeku grew up in Lagos, Nigeria, where survival of the fittest was the rule, “the continual crushing of one another, killings and lust for power.”

“How can we live with love in our hearts, with laughter and joy, when there have been and continue to be inhuman cruelties and murders committed every second of every day?” he asked.

“Flash” is not an uplifting work, but it is one that will profoundly affect the audience. The stage is bare, covered with black soil and fabric panels running around the outside. There is a cast of one narrator (Lindsey Beamish) and 10 dancers: Cynthia Arellanes, Mary Ann Brooks, Nicole Casado, Zach Heinzer, Mariah Heller, Hien Huynh, Manami Ii, Maribel Lopez, Jake Parkhurst and David Shih.

The 10 work as an ensemble, within which each dancer is encouraged to create his or her own character that integrates into the whole. Onikeu’s approach is innovative since he integrates improvisational and choreographic techniques. He also works with character and draws out the unique genius of each performer.
Beginning with the “nothingness” that is the world and the “spark” that creates the flash that directs the play, the narrator sets emotional scenes, to which the dancers react. In the first scene, for example, the narrator is describing the murder of a mother and her child as witnessed and, in some sense directed, by her son. It is a tale that doubles you over in pain and the pain is elaborately expressed by the dancers.

There is one brief “happy dance,” where the dancers rejoice in their lives, only to have the horror of their situation brought home to then again.

Brooks is spotlighted as she expresses her own pain eloquently. “I have been challenged as a performer — dancing from the inside out and not controlling the dance but letting the dance have its own life,” she said. “As dancers, we’re taught to control our movements, yet Qudus is teaching us how to allow the dance to develop and become something larger than us and our habitual dancing patterns.”

A girl carrying cheeses home for her mother comes upon a group of refugees, obviously starving, and she tries to share her cheese with them, until threatened by soldiers to move on or join the group.

The final scene graphically represents carnage, as a machete-wielding soldier attacks the people of a village. Anyone who has seen “Hotel Rwanda,” or has followed the carnage taking place in many African countries, will find the story familiar. As the machete came down again and again and again, I was reminded of our friend Victor, a refugee from the carnage taking place in then-Zaire. One night a police car stopped in our driveway and Victor was terrified. Later, he told us “when the police come to your house in Zaire, it is to kill you.”

I pictured Victor and his family as I watched the finale of this powerful work. Onikeku had brought that very real scenario of my friend to life for me and I felt changed by it.

Following opening night, there was a question-and-answer session and one dancer summed up the experience very well, saying that it was “an interesting journey of self-discovery.”

Whether on stage or in the audience, I suspect everyone will leave Wright Hall having been on their own journey of self-discovery, with greater awareness of what is going on in the world around us.
Posted by Bev Sykes at 1:06 PM