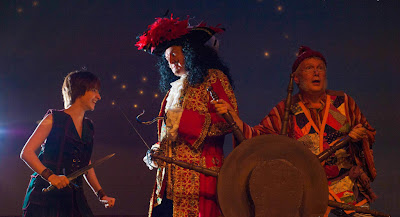 If you have children — or grandchildren — looking for something to do the next couple of weekends, I highly recommend taking them to Woodland Opera House’s sparkling new production of “Peter Pan.”

This is not the Peter Pan of Disney and you probably won’t recognize any of the songs, but this version, with book, music and lyrics by Piers Chater Robinson and directed by Angela Baltezore, is loads of fun. The theater full of young children — who sat spellbound throughout the evening and cheered at the end — attested to that (there was even one toddler, so caught up in it all that when the children’s choir marched up on stage to take their bows, he slipped out of his seat and followed them and had to be rescued by his mother).

Robinson created this adaptation of J.M. Barrie’s “Peter Pan” in 1985, following approval by the trustees of Great Ormond Street Children’s Hospital in Britain, to whom Barrie had left the Peter Pan rights. Robinson’s adaptation was further developed into “Peter Pan The Official British Musical.” It has since been performed all over the world and has been a favorite in the West End in London for the past 25 years.

Leading the cast in the title role is Emily Jo Seminoff. I first met this talented actress in 2006, when she was playing this role for the second time with Davis Musical Theater’s Young People’s Theater. It has been a delight to watch her grow up on stage and her Peter in this production is spot-on, the perfect little boy who won’t grow up and becomes confused when Wendy wants to. She also flies through the air with the greatest ease, courtesy of ZFX Flying Effects.

Seventh-grader Emily O’Flaherty tackles the role of Wendy and does it beautifully. She has a lovely voice and is wonderfully at home on stage.

Rodger McDonald is the father of the Darling children and also Captain Hook. Was there ever a better actor for the role? As Hook he is appropriately nasty, without scaring the children in the audience, and as Mr. Darling he is all bluff and bluster, but obviously loving his children very much.

Returning to the stage after a long hiatus is Betsy Taloff, as Mrs. Darling, the mother everyone would like to have, loving and understanding, particularly when Wendy expresses a desire to return to Neverland once a year to help Peter with spring cleaning.

Stealing the show are Marcus Lucia as Nana, the nursemaid dog, and Mary Dahlberg as the crocodile who follows Hook everywhere, hoping to get another taste of him. Aided by the costume design of Denise Miles these two make very credible (and popular) animals.

Kudos also to Chris Taloff for “playing” Tinker Bell. The green light which flitted around the stage, augmented with twinkle music by musical director James Glica-Hernandez, was just perfect, especially when Tink nestled in Peter’s hands, dying. There was also lots of fun with Hook at the curtain call.

The production is great fun for the whole family and will only be around weekends until May 12, so get your tickets before they are sold out.
Posted by Bev Sykes at 7:18 PM