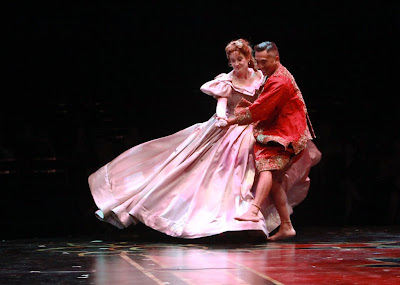 There is a sumptuous feast for all the senses currently gracing the Music Circus stage.

One of Rodgers and Hammerstein’s most treasured musicals, “The King and I” filled the Wells Fargo Pavilion on opening night and each familiar tune was greeted with thunderous applause. This is the 13th production of this show, which California Musical Theatre reports is one of the all-time favorite musicals of Music Circus patrons.
What’s not to like in this stage classic, which won five Tony Awards in its first season, 1951, and went on to be a staple for Yul Brynner, who played the king for most of the rest of his life?

The story is based on the 1944 book, “Anna and the King of Siam” by Margaret Landon, which was based on the memoirs of Anna Leonowens, governess to the children of King Mongkut of Siam in the early 1860s. Mongkut hoped that hiring a British governess would help modernize his kingdom.

As the king, Paul Nakauchi is no stranger to this show, having made his professional debut in the ensemble of a production starring Brynner. He went on to play the king opposite Elaine Paige in London’s West End, understudied and went on for Lou Diamond Phillips in the 1996 Tony Award-winning Broadway revival and played the role on the 2010 Broadway Asia tour.

Nakauchi’s king straddles the line between hard-fisted ruler and confused intellect who realizes that things in his country have to change, but isn’t sure exactly how. His anguish becomes clear in “Is a Puzzlement” as he tries to decide which way is the best way for Siam.

Christiane Noll’s Anna is a more feisty Anna than I have seen before, standing her ground with glaring ferocity, determined to get all that she was promised. While sparks fly between the two protagonists, there are moments of tenderness, when we see the growing respect and friendship between the them. Her “Hello Young Lovers” was wistfully tender, as she seemed to be in a far-away time when all was well with her husband, Tom.

In previous productions there seems to be a potential of romantic interest between the two, but in this production they are worthy adversaries and off-and-on good friends, without the complication of romantic entanglements. That said, however, “Shall We Dance” (the high point of the show for the audience) was electric, when each let his or her guard down, just a bit.

A marvelous addition to the cast was Diane Phelan as Tuptim, the gift to the King by the King of Burma. Her “My Lord and Master,” her first song, was dazzling. Her duet with lover Lun Tha (Telly Leung) was poignant and moving.

The King’s No. 1 wife, Lady Thiang, is played by Tami Swartz. As with this production’s Anna, this Lady Thiang is more feisty than others I have seen in this role. She loves her husband, and understands that she cannot help him solve his problems. But there is a sharp side to her as well, especially as concerns Tuptim and Lun Tha.

The king’s children are too numerous to mention, but all are adorable and perform well in their scenes, particularly the perennial favorite, “Getting to Know You.”

However, one must mention Carter Thomas as Anna’s son Louis, and Andrew Apy as Prince Chulalongkorn, who will inherit his father’s throne soon. Apy did well expressing both the bravado of a teenage boy and the fear of having the responsibilities of being king when he does not feel ready.

Thomas is a perfect little British lad and his friendship with Chulalongkorn was fun to watch (especially when both do the reprise of “A Puzzlement.”) However, he had some odd dialog coaching, as I have never heard an accent quite like his. It was jarring whenever he pronounced a word with an “E” sound at the end of it.

Always a high point in this show is Tuptim’s “Small House of Uncle Thomas” and this one was outstanding. It may be the first time I was struck by the quality of the voices of the Royal Singers (Louise Marie Cornillez and Linda Igarashi). Excellent job, ladies.

This outstanding production continues to delight Music Circus audiences, for good reason.
Posted by Bev Sykes at 10:53 AM

Labels: King and I, Music Circus