Prelude to a Kiss 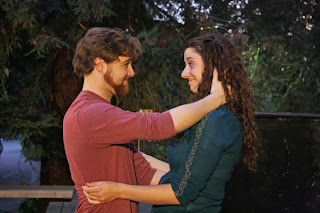 Common House Productions has just opened the 1988 play, "Prelude to a Kiss," by Craig Lucas at the Wyatt Pavilion in the UCD Arboretum. The show will run weekends until October 27.

Director Robert Williamson admits the play "was not what I expected. It has romance, but it’s not romantic. It has mystery, but it’s not mysterious. There is magic without being magical, and on my first read-through I didn’t like it." On subsequent reads, he realized he was wrong. "There was humor I hadn’t seen, and it was mysterious and romantic and magical, not in a grand adventurous way, but in the way that occurs in everyday life."

This is an old fashioned fantasy, where we discover that people are not really who they seem to be. On the wedding day of Peter (Connor Dick) and Rita (Wendy Wyatt), a strange old man (Joachim Schnier) gives the bride a kiss and, with the flickering of lights, the two exchange bodies, the new bride now in the body of the old man, and the old man delighted with his new young body.

Inexplicably, the old man leaves the wedding without an attempt to question the new situation. Peter and his "bride" set off on their honeymoon to Jamaica, and Peter must decide what the true nature of love is.

With an actor as totally likeable as Connor Dick, the show can only be enjoyable. His comments to the audience draw us in and make us hope for him to figure out what has happened to the woman he loves.

Slowly, Peter comes to realize that there is something wrong with his new bride and decides that it happened at the time of the kiss. He sets out to search for his lost love, which he finally finds in the body of the old man.

Wendy Wyatt creates a very likeable, if complex, person in Rita. The whirlwind passion-filled courtship makes us smile as it progresses to that awkward, impulsive proposal. Wyatt does well at keeping her testosterone under control in the female body she now inhabits, but letting just enough of it out to remind the audience that there’s really a guy living in there.

Schnier is less successful in being a young woman trapped in a dying old man’s body and his scenes with Peter, which should have been poignant, after Peter realizes what has happened, seem to fall somewhat flat.

Sarah Cohen is Mrs. Boyle, Rita’s emotional mother, who ultimately helps in the culmination of this story. Cohen always delivers a convincing performance, and this one does not disappoint.

Matthew Mueller gives an uneven performance as Rita’s dentist father, who sometimes feels awkward in his portrayal, but is fierce in his dedication to his daughter. The script fails Mr. Boyle in giving him unbelievable lines following the break-up of the newlyweds.

John Malin gives an energetic performance as Peter’s friend, Taylor, instrumental in the meeting of Peter and Rita. Taylor is the friend we would all like to have in our corner.

At its core, this play is about mortality, and aging, and the nature of romantic love. Why do we love a certain person? Is it because of how that person looks, or is it because of that person’s beliefs and personality. Can you separate one from the other?

Kevin Admanski is the artistic director for this play and, given the shortcomings of the Wyatt Deck, manages to create a number of different scenes merely by the movement of two tables and a few chairs which are moved about by the cast while a scene is going on at the front of the stage, all well choreographed.

This is a short show, about 2 hours, which includes a 10 minute intermission. No refreshments are sold and the evening may get a bit cold, so jackets or blankets are recommended. Bug spray is also recommended for those mosquitos visiting from Putah Creek. A pillow for padding on the hard folding chairs may also make the time more pleasant.
Posted by Bev Sykes at 2:18 PM