Not in the Stars 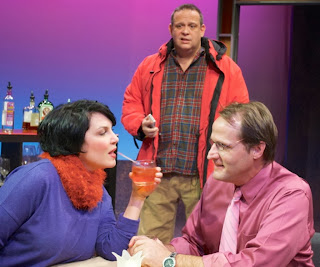 People have been asking me for years why I don’t review shows at the B Street Theater in Sacramento.  I have heard wonderful things about productions there, but when I started working for The Enterprise, it was not on my list of theaters to review.  The criterion was that if there was a Davis person in the show, or in some other way involved with the show, I could review it.  But that was never the case with B Street.

Recently, however, Buck Busfield, the Producing Artistic Director of B Street, realizing how many people in Davis come to his shows, convinced The Enterprise to let me add that theater to the list of places where I go, and so I went off on Sunday to my very first B Street production, “Not in the Stars,” a romantic comedy written and directed by Busfield.  Apparently it is a B Street tradition that Busfield write an original show each year during holiday time.

This show, in fact, was originally a one-act produced in 1994, the cast including Kurt Johnson, also in tonight’s cast.  It was reprised in 1996 when B Street was going through financial difficulties.  The cast then included not only Johnson, but also Elisabeth Nunziato and Dave Pierini, both appearing again in the current production.

Busfield decided to resurrect the show and expand it into a full evening’s entertainment.  It is still a work in progress, he explained to me, saying that they had made major changes before opening night and would probably continue to tweak the show as it continues through January.

The show actually made me kind of angry.  It was so amazingly good, so tightly written and so beautifully acted, that I was upset I had missed years of similar productions.

While this is the annual Christmas show, this is not a play about Christmas.  There is a red couch on stage and a character wears a green coat, but direct reference to any December holiday is nonexistent.

What is existent is a very funny script, with three seasoned actors, each playing 2 characters whose live intersect in two acts.

Act one centers on book editor Yvonne (Nunziato), nervously waiting for a blind date, Clare (Johnson) to arrive.  Yvonne is a bundle of neuroses, having been married to a man who left her for her best friend, and having had her share of bad dating experiences.  So self-protective is she that she rejects Clare on first sight, deciding after one look that they are not destined to be soul mates.

Clare has his own neuroses to deal with.  He’s an actuary whose job it is to calculate risks and he opens a dialog with Yvonne, a dialog that sizzles, as the two dance the dance of two neurotics who are better suited for each other than either is willing to admit.

Pierini plays two roles in the first act, that of Mac, a hapless telephone repair man whom Yvonne mistakenly thinks is Clare, and later a waiter at the restaurant where Clare and Yvonne end up going for dinner.  The dialog between the three at the restaurant progresses like a well oiled machine, displaying how attuned these actors are to each other and how well they work together.

Act two centers on Mac, at home with wife Maria (Nunziato again), complaining about the “nutcase” he visited earlier in the evening, the only real connection between Act 1 and Act 2  Mac is the guy who knows everything and wants to make sure you realize that. We’ve all known them. The person whose only interest in what you are saying is so he can top it or expand it or tell you how you’re wrong. He’s not a bad guy and he obviously worships the ground his wife walks on, but at the same time, he doesn’t listen to a thing she says and hasn’t a clue how dissatisfied she is.

Maria is a mousy woman who only wants a night out by herself to get away from Mac for an hour or so.  Nunziato has changed clothes from the bold take-charge costume of Yvonne into a muted pastel outfit of Maria, whose very clothes show how closed she is. (Costume design is by Paulette Sand-Gilbert.  I also liked the change to a pink lipstick match her other muted colors.)

Maria leaves a bewildered Mac and takes herself to a local hotel bar, where she meets Paul, the bartender, who becomes a good sounding board for her, until Mac, worried that she is out in the world all alone, finds her and interrupts her conversation with Paul.

Back at their home again, Maria’s solution to taking back her life is ingenious and had the audience in stitches.

The show ends with Mac examining his actions and...did he learn anything?  A simple telephone call may change everything.
Posted by Bev Sykes at 4:31 PM

Labels: B Street, Not in the Stars