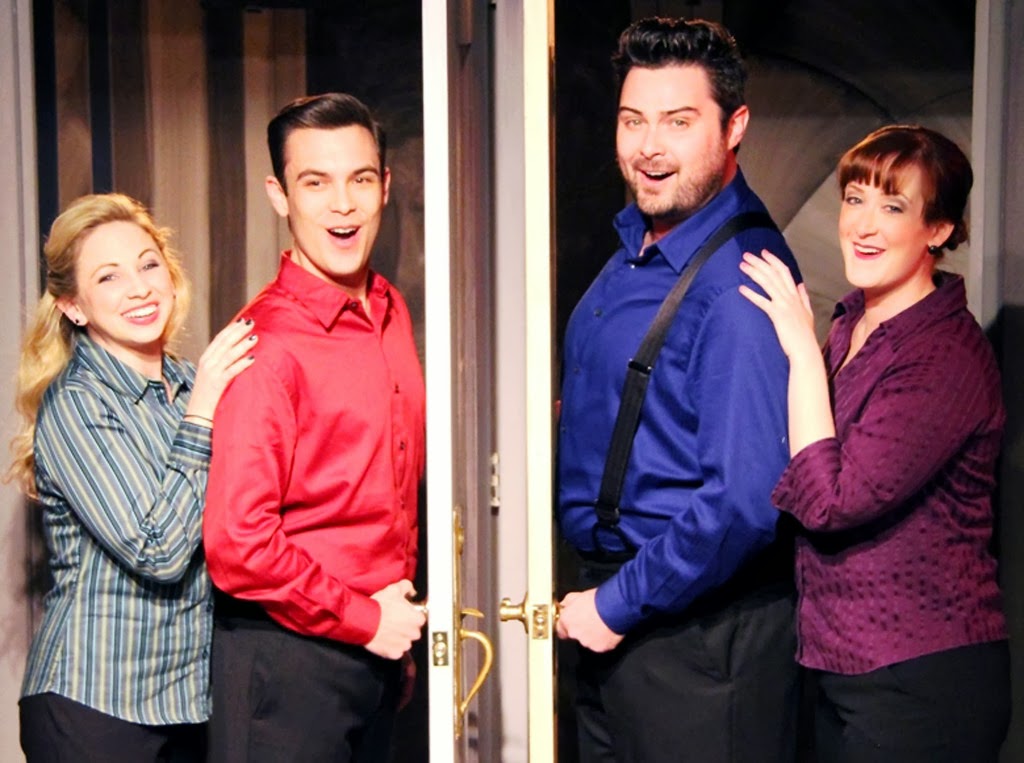 One of the many outstanding songs in “Closer Than Ever,” a musical revue at the Sacramento Theatre Company, is called “The March of Time.” In it, the four performers – Jerry Lee, Kristen Heitman, Andrea St. Clair (who may be familiar to Davis Musical Theatre and Woodland Opera House audiences), and Nick Adorno sing about getting older:

The song was particularly meaningful to me the night we saw the show because that afternoon we had attended a birthday party for a 79-year-old friend, attended by lots of people we had not seen for many years. I was struck with more gray in the hair, more artificial parts, more stooped shoulders, more canes. We were all victims of the march of time.

While Broadway has been presenting many shows lately, hoping to draw a younger audience, as it must if the American Musical is to survive, this little 1989 off-Broadway revue shows there is still relevant material to appeal to an older audience.

The show was cobbled together by Richard Maltby Jr. (lyricist) and David Shire (composer) from songs they had written that had been cut from previous shows. The end result is an evening of short stories, which, without dialog, eloquently capture the human soul (according to director Robert Marra).

Maltby himself has said he believes people are more interesting in real life than when they are stage characters. “I would like to see songs that are at least as complex as my friends.”

You probably have never heard of most, if not all, of these songs, but I overheard more than one member of the audience walk out of the theater saying, “Now I have to buy the CD.”

Some of the highlights include the poignant “She Loves Me Not,” which deals with unrequited love … in some surprising permutations.

St. Clair does a very funny rendition of “The Beat, The Tiger, The Hamster and The Mole,” making her case for the irrelevance of men.

The ensemble number “There’s Nothing Like It,” the most energetic of the songs, talks about the things we do to our bodies in the name of fitness. It had the audience in stitches.

In “Miss Byrd,” Heitman shows how one can make the most of one’s coffee break, while St. Clair sings the poignant, life-changing anthem “Life Story,” which could be the life story of many of us.

Act two opens with St. Clair, Heitman and Adorno singing “Three Friends,” about the love/hate relationship among lifelong friends … and the value of those relationships.

Pianist Samuel Clein joins in the first-act finale and also with Heitman on “There,” while Rod Verette, the bass player, gets to shine with her in “Back on Bass.”

Jerry Lee, who seems to be everywhere these days, has some wonderful songs, maybe the most emotional of which is “If I Sing,” a tribute to the lyricist’s father and his contribution to his son’s appreciation of music.
Lee also joins with Adorno in the lovely “Fathers of Fathers,” beautifully expressing the parenthood experience.
Adorno and Heitman discover the positive points of a second marriage in “Another Wedding Song.”

“Closer than Ever” is probably a show you’ve never heard of, the songs are songs you’ve never heard before and yet anyone who has the good fortune to catch this little gem at Sacramento Theatre Company is certain to recommend it to all of their friends.
Posted by Bev Sykes at 6:00 PM

Labels: Closer than Ever, Sacramento, STC