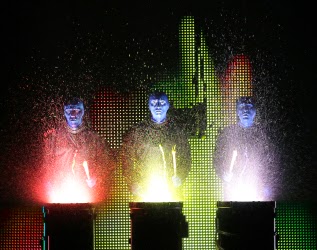 “I loved it. Brave, adventuresome, amusing, challenging and those drummers rock! The woofers and subwoofers they used blew my hair backwards!” was a comment on Facebook by someone attending The Blue Man Group’s performance this week at the Sacramento Community Center.

The Blue Man Group is unique. There is definitely nothing like it anywhere. The group’s website even says “Blue Man Group cannot be explained; it can only be experienced!” It describes itself as “an explosion of comedy, music and technology.”

The group was founded in 1987 by Chris Wink, Matt Goldman and Phil Stanton and consists of three actor-musicians who wear bald caps, painted with electric blue latex paint. (There are four Blue Men listed in the program, so there is no way of knowing who is on stage for any performance.)

They do not speak, but interact silently with the audience. They play drums, sometimes with colored liquid poured onto them so that it splashes into the air. They play intricate PVC pipes, they are backed up by “Blue Man Swing,” a small combo group located on two platforms above the stage. And there is lots of technical stuff going on, with strobe lights, special game-type characters projected, and lights turned out into the audience.

Technical elements sometimes can be problematical, and the curtain on opening night was held for 45 minutes while they fixed a technical glitch (which I guess was fixed, because nothing seemed to go awry during the performance).

There is a cameraman to videotape certain portions of the show and project it on the back screen, especially when the group is interacting with the audience, not only the people in the “poncho section” (the first three rows, where people are almost guaranteed to get splashed and are given complimentary ponchos when they arrive), but also climbing on the seats of the back audience, creeping up the aisles and peering intently into the faces of unsuspecting audience members.

There is an electronic message crawl above the stage, sending notes out to the audience. On opening night the audience was invited to speak “Happy Birthday” to someone and someone else was called out, informing him that he had not updated his Facebook status in the past minute and a half.

The audience loves it and it begins a nice bond between the performers and the audience.

The finale is a many-minutes-long dance party, with the audience standing and batting huge multi-colored balls around while a cannon on stage shoots streamers of paper out into the audience.

As I read this, I realize that they are right — you can’t explain Blue Man Group, you can only experience it. Some members in the audience left long before the end, others were screaming wildly for an encore.

Critics were offered earplugs in case we wanted them. I wore mine and at one point removed them and quickly put them back in again. The noise level can be ear-shattering, but if you are used to rock concerts, I suspect this is part of the attraction.

It is definitely a not-to-be-missed experience, if only to say you’ve seen them. It’s not going to be to everyone’s taste, but if this rather stilted description sounds good to you, you’re gonna love it!

One thing is for certain … you’ll never think of Twinkies the same way again … or marshmallows either.
Posted by Bev Sykes at 11:26 PM