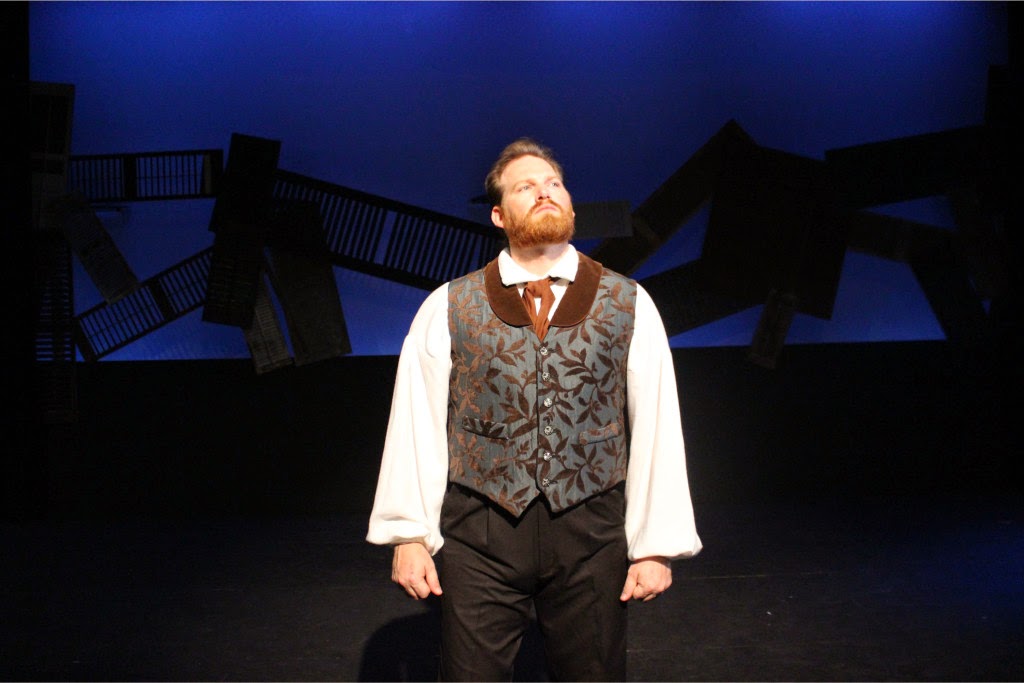 “Les Misérables” is the show that Steve Isaacson has dreamed of directing since he first saw it in Los Angeles in 1988. Now the Davis Musical Theater Company has finally brought it to the Jean Henderson Performing Arts Center, playing to a sold-out, opening-night audience which gave it an enthusiastic standing ovation at the finale.
This is a mostly outstanding cast, whether principals or chorus. The first act finale (“One Day More”) will give you goose bumps, and there are minor characters who will knock your socks off.

F. James Raasch, returning to DMTC after a 26 year hiatus, is Jean Valjean, that hapless hero imprisoned for stealing a loaf of bread to keep his sister’s child from starving to death. Raasch gives his character nobility and dignity and his “Bring Him Home” was achingly poignant, as he prays to God to keep his daughter Cosette’s boyfriend safe in the coming battle.

A bitter man, Valjean takes his anger out on a bishop (Jeff Nauer) who befriends him, only to have the bishop change his life. Valjean resolves to devote the rest of his life to doing good for humanity.

Nathan Lacy could give Russell Crowe lessons in how to play the role of Javert. The Inspector is obsessed with Valjean and determined to see him back in prison — years after he turned his back on his parole — despite the honorable man he has become in the interim.

Andrea Eve Thorpe is Fantine, the factory worker whose secret is the child she had to leave behind, whom she now works to support. She imbued the character with tremendous pathos and heart and it was just too bad that she was saddled with a curly blond wig that made her head look more like Harpo Marx and was out of place among the tattered factory workers. No wonder they all hated her.

But that did not prevent her from giving a knockout rendition of the iconic “I Dreamed a Dream.”

Fantine’s young daughter Cosette (Lily Linaweaver on opening night, alternating with Katie Smith-Induni) was a little taller than one might expect, but she was very fragile as the scared little girl who has been exploited by her caregivers. The older Cosette (Jori Gonzales) has a lovely duet with Marius and at her wedding wears one of the most beautiful bridal gowns I have seen (kudos to costume designers Denise Miles and Jean Henderson).

The villains we love to hate were Thenardier (Mike Mechanick) and his wife (Cyndi Wall), caregivers to Cosette, who were loud, gross, over the top and very funny. Obviously audience favorites. “Master of the House” is always a crowd pleaser and this was no exception.

Eimi Taormina is their daughter Eponine. (The younger Eponine is played by Smith-Induni, alternating with Linaweaver.) It is a role Taormina was born to play and she did not disappoint. “On My Own” will tug at your heartstrings, as she sings of her love for young Marius, who has given his heart to Cosette.

Scott Scholes as Marius is nothing short of outstanding. Scholes was seen in last year’s “Cabaret” as “tenor soloist” who set the tone for the whole show, and in this production, he takes his talents another step forward and makes Marius a more memorable character than he sometimes is.

The real treat of the night was Ryan Favorite as Enjolras, the leader of the student rebels, who gave a spirited performance with a powerful voice which made you sit up and take notice.

Marley Michel as Gavroche, the street urchin, had a lot of spunk, but sadly not a lot of volume, but his (or her, as Michel is female) death was handled so emotionally that it brought tears.

One cannot review this show without giving the set a big bravo. Thanks to what Isaacson described as “Flintstone mobility,” the student barricade on the street put itself together, turned itself around, and took itself off stage again. It was a marvel.

James Cubbage also deserves mention for the intricate lighting design. There were a few glitches on opening night, but when it all works right, it’s wonderful. I particularly liked the water effect in the Paris sewers.

For a company the size of the Davis Musical Theater Company, this is a monumental undertaking, but it was handled beautifully and the audience left thrilled. (“This is the best night I’ve had in this theater,” one patron told me).

Tickets are selling fast and many performances are nearly sold out, so order soon.
Posted by Bev Sykes at 10:55 AM