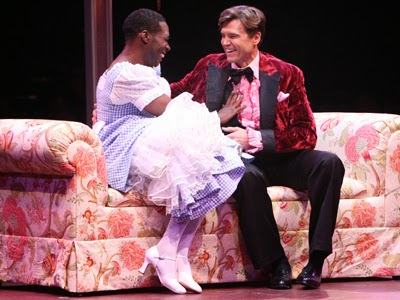 The Music Circus is closing out its 2014 season with a sparkling production of Harvey Fierstein and Jerry Herman’s musical, “La Cage aux Folles,” directed by Tony Spinosa and choreographed by Dana Solimando.
“La Cage” was a big hit in 1984, when it won six Tony awards (it had been nominated for nine). Revivals in 2004 and 2010 both won Tonys for Best Revival; it’s the only musical that has won the Tony Award for Best Revival of a Musical twice and the only show that has won a Best Production Tony Award (Best Musical or Best Revival of a Musical) for each of its Broadway productions.

A scaled-down London production was produced in 2008 and it was this scaled-down show that opened on Broadway in 2010 and is what is being presented on the Music Circus stage.

The story is based on a 1974 French film of the same name and focuses on St. Tropez drag club owner Georges (Brent Barrett) and his longtime partner Albin (Alan Mingo Jr.), who stars as “Zaza” in the club.

The two have raised a son, Jean-Michel (Michael Lowney), now 24, who is Georges’ biological child whose mother abandoned him at birth. It is Jean-Michel’s announcement that he is engaged to be married — to a girl (“where have we gone wrong?”) — that sets the action of this comedy in motion.

It seems Jean-Michel’s fiancée Anne (Julie Kavanagh) is the daughter of the head of the “Tradition, Family and Morality Party,” whose stated goal is to close the local drag clubs.

Jean-Michel wants to bring Anne’s parents home to meet his own parents, but he wants to bring his real mother into the house and relegate Albin, whom he finds an embarrassment, to anywhere other than the family home.
The stage is set for comedy, tragedy and emotion.

This revised version of the show has some noticeable differences from the original, specifically in the tempo and genre of some of the familiar songs. “A Little More Mascara,” for example, was written as an up-tempo Broadway musical-sounding song, but in this version it is more a bluesy number. Likewise, there are dialog changes and plot points that make no sense (why are Anne’s parents spending the night, when in the original they were only coming for dinner?).

But these are minor complaints from someone familiar with the original version, which won’t be noticed by newcomers to the show.

There are wonderful performances in this production. Barrett is very strong as Georges. The actor has a very long theatrical history and he is the glue that holds the show together.

Mingo seemed to take a while to get his engine revving. He was perfectly fine as Albin, but there was initially little chemistry with Georges and he didn’t hit his stride until Albin’s signature “I Am What I Am,” a very powerful song of pride and defiance that closes Act 1 and brought cheers from the audience. Act 2 was his. From the moment he stepped onto the stage dressed as a woman, and introducing himself to Anne’s parents as Jean-Michel’s mother, his performance was golden.

Lowny is an uptight spoiled brat as he heartlessly tosses aside the only “mother” he’s ever known in order to impress his future in-laws, but he’s head over heels in love and has lost his head. Thank goodness he finds it before the end of the show.

Reggie DeLeon is the “butler/maid” (there seems to be some confusion about which he/she is), and plays the part in a much more subdued fashion than most actors I’ve seen in this role, but he is very funny anyway.
Kevin Cooney is M. Dindon, the uptight one-man moral majority. Watching him loosen up a little was a delight.
Mme. Dindon (Heather Lee) is a repressed political wife who seems only too happy to learn of the relationship between Georges and Albin and seems thrilled to be able to let down her hair for once. Literally.

Barbara McCulloh is Jacqueline, owner of a famous restaurant by the same name. One is never sure if she’s a good guy or a bad guy, but McCulloh plays her to the fullest and has a nice duet with Albin.

“Les Cagelles,” the dancers at the club (Brian Steven Shaw, Steven Wenslawski, Adam Lendermon, Steve Schepis, Thay Floyd and Christopher Shin), nearly steal the show in every one of their dance routines. However, I miss the days when there were more dancers and there used to be one or two girls mixed in with the guys, and the audience didn’t know who until the big reveal at the end.

This nicest thing about this musical has always been that it is a simple love story where the lovers happen to be of the same gender, and watching the Music Circus audience leap to their feet to applaud that is very refreshing.
Posted by Bev Sykes at 3:55 PM