There is a Happiness that Morning Is 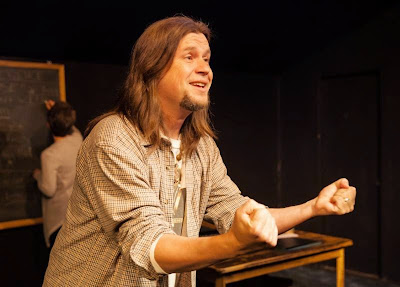 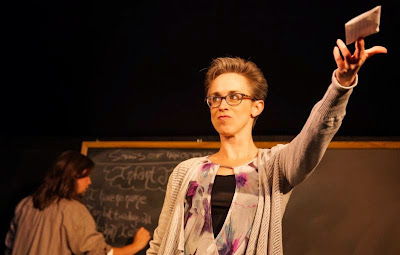 As a critic, you are sometimes sent to review shows that sound like they are going to be pretty dull, but you go anyway. KOLT Run Creations’ “There is a Happiness That Morning Is,” at the Wilkerson Theater in Sacramento, was one of those shows. Based on the poems of the Romantic poet, William Blake, how exciting could it be?

It’s one of the perks of being a critic — the opportunity to discover gems like this that you otherwise would never think of seeing. Written by Mickle Maher, the premise for this one-act play is that two professors at a private college were observed having sex in the quad in full view of their students and the dean of the college. They have been ordered by the dean to apologize to their classes or lose their jobs.

Professor Bernard Barrow (Greg Hanson), who teaches a morning class in the poetry and prose of William Blake, goes first. Obviously still in the throes of after-glow, barefoot, dirt-covered, with leaves in his hair, he waxes poetic (literally, speaking in rhyme), rhapsodizing on the love-making and his 20-year relationship with Ellen Parker (Kelley Ogden) and railing against the administration and parents who were appalled by this very natural expression of the lovers’ passion for one another.

He chooses the poem “Infant Joy” (“I happy am, Joy is my name, Sweet joy befall thee!”) as he explains why he cannot be apologetic about the incident. Maher’s brilliant script, combined with Hanson’s delivery, make this a hilarious monologue.

In less skillful hands the device of using the rhymes of Blake and adding rhyming dialogue to fit the situation at hand might fall flat, but in the expert hands of both Hanson and Ogden it becomes a wholly accessible conversation for the audience.

I thought at one point that this must have been what it was like to see Shakespeare’s plays when he wrote them, when there was no such thing as “Shakespearean English” because it was just the language everyone spoke.

The afternoon class, led by Professor Parker, is quite different. As opposed to Barrow’s casual dress and demeanor, she is prim and proper, in a demure suit, with every hair in place. Though she leads off her class with an apology, it is, again, not for the incident itself, but, using Blake’s “The Sick Rose,” she apologizes for her years of conformity to the system (“O Rose, thou art sick! The invisible worm”).

As she warms to her subject, the obscenities flying out of her mouth are in sharp contrast to her appearance and again, the end result is a hilarious monologue.

However, Bernard decides to sit in on her class and this leads to as public an argument as their earlier love-making.

Rhymes and decorum go out the window when the dean (identified as “Man” in the program, and played by Greg Parker) interrupts. To say more about his role in this production would be to spoil the fun for the audience, so let’s just say that his character brings an unexpected intensity to the plot.

This show is so much fun that my only fear for it is that, given the remote location of the Wilkerson Theater and the perhaps unknown reputation of KOLT Run Creations, it might not be seen by as many people as should see it. Do yourself a big favor and buy a ticket. You will not be sorry.
Posted by Bev Sykes at 11:25 PM