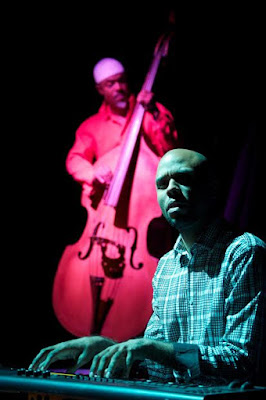 “Bars and Measures,” by Idris Goodwin, is a new play commissioned by B Street’s producing artistic director Buck Busfield after seeing Goodwin’s award winning “How We Got On,” a coming of age story of teenagers finding identity in the suburbs using hip hop duels in parking lots.

Busfield envisioned a musical play, based on true events, which would focus not on hip hop, but on jazz and the dueling of two brothers, one a classical pianist and one a jazz bass player.    The idea was sparked by a 2007 article Busfield read about the brothers in the New York Times. “It caught my attention because so rarely is real life more interesting than art,” Busfield said.

Bilal (Jahi Kearse), a passionate jazz musician recently converted to Islam, is serving time in prison on charges of conspiring with terrorists.  Brother Eric (Darian Dauchan) is a Christian and a budding classical pianist.

The love these brothers feel for each other is communicated through their common language, music, on Eric’s regular visits to the prison.  Eric wants Bilal to teach him the meaning of swing and break him out of the rigidity of his training. Their scat duets are some of the high points in this play, as Eric learns the rhythms, but Bilal is trying to get him to embody the feelings in his soul.  Their sessions are what is helping Bilal retain his sanity, while stuck in solitary confinement.  He is writing his story in jazz and he hopes Eric will be able to pass it along to the world.

Noah Agruss is the composer and musical director for this play and his work is crucial to the power and the fluidity of the story.

At the same time that Eric is working musically with Bilal, he is also working to get him freed on all charges, as Bilal declares his innocence and feels that the charge was an example of anti-Islamic profiling.

As the play progresses and the brothers come closer to the date of Bilal’s trial, the breakdown of Bilal becomes more visible, his nerves more in evidence and his body broken by anti-Islamic attacks, mental and physical, within the prison.

It becomes, then, much more than just a play about music, but a play that embodies family, race, religion, politics, and justice.

The supporting cast includes Jazmine Ramay and Jimmy Sidhu, both of whom play several minor characters.  Both are particularly good in the trial scene.

But it is the powerful performances of Dauchan and Kearse, under the direction of Jenny Koons, which elevate this musical play from the ordinary to the extraordinary.

Scenic designer Samantha Reno has created a simple geometric set which, aided by the spectacular lighting design of Stephen Jones lends stark realism to each of the scenes.

Following its run in Sacramento, “Bars and Measures” will continue on with a National New Play Network Rolling World Premiere at Boston Court Theater in Pasadena, Prop Theater in Chicago and Jungle Theater in Minneapolis. I predict that it will have a long life.

Labels: B Street, Bars and Measures