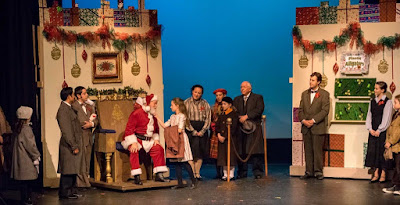 I first saw “Miracle on 34th Street” when I was a child. The movie — starring Maureen O’Hara and Natalie Wood as her young daughter — was released in 1947 and was based on a story by Valentine Davies.

It has, since that time, been my very favorite Christmas-themed story: A mother who works for Macy’s is teaching her daughter reality vs. fantasy, refusing to let the child believe in fairy tales or in Santa Claus, until she meets an elderly man named Kris Kringle who insists he is the real Santa Claus.

I had not seen the musical version, by Meredith Willson, and so was happy to see that it was being presented by the Woodland Opera House. Sadly, the show was a big disappointment, and the bulk of the problem is with Willson himself.

The man who created the wonderful classic “The Music Man” has created a show that consists of mixed emotions from delightful to dull, far too many exuberant full-chorus numbers, a story line that does not flow consistently, and the creepy situation of the friendship between a strange man and a young girl, which becomes so intense she calls him “Uncle Fred,” but her mother doesn’t have a clue what her young daughter is doing.

In 1963 this may seem an innocent relationship — and it is — but it is nothing that would pass so innocently today. (In the movie, Fred was a next-door neighbor and had Susan’s mother’s permission to spend time with her daughter.)

There is even a number, “She Hadda Go Back,” which is essentially “Trouble” from “The Music Man” with different words.

The best musical number in the show is “It’s Beginning to Look a Lot Like Christmas,” which was recorded by both Bing Crosby and Perry Como in 1951 and was stuck into this show 12 years later.

If you combine all the things wrong with the show to begin with and add a trumpeter who was, at least on opening night, definitely not up to the task of a show that relies very heavily on a good trumpeter, the whole thing was a mess.

Even the set was a disappointment. One of Woodland’s best features over the years has been its rock-solid sets, but in this one a whole wall moves when a door is opened. However, with 20 scenes over two acts, I understand that one can’t anchor pieces as well as in a smaller show.

None of these points should take away from the good performances by the cast, however. Makenna Harding-Davis as young Susan Walker is a marvel. Her performance throughout was outstanding and her scenes with Jeff Nauer, as Kris Kringle, were some of the best in the show.

Nauer was chubby and plump, a right jolly old elf who could make anybody believe in Santa Claus.

Erik Catalan, as Fred Gailey, the man who wants to help Susan have a more normal childhood, is very good and holds the show together, though his scenes with Susan’s mother Doris (Crissi Cairns) extend the bounds of disbelief. The first time they meet, he plants a passionate kiss on her, the second time they meet, she is yelling and screaming at him, and their third scene has them planning marriage.

Don Draughton is a good R.H. Macy and Ken Watkins does well in the small role of Mr. Gimble, and also the larger role of a balloon vendor in the parade scenes, while Rick Simonson is a believable judge, presiding at the trial that will determine Kris Kringle’s sanity.

The ensemble, a combination of adults and children from Woodland’s young people’s program, was marvelous in each of their ensemble numbers and was a highlight of the production. Of particular note is young Peyton Kessler as Tommy Mara Jr., son of prosecutor Thomas Mara Sr. (Matthew Abergel, who also appears as a policeman), who provides some of the evidence that clears Kris.

The show ends happily ever after and should send everyone home with warm feelings about the holiday, but I felt a need to watch the original movie again. I wish Willson had given this talented cast better material to work with.

On Sunday, Dec. 6, the company will hold a special “Cookies and Cocoa with Santa,” giving children an opportunity to visit with Kris Kringle from the production. Tickets are $10 per child (no charge for adults) and must be purchased in advance.

The event will include storytime with Santa on stage, a chance for each child to sit on Santa’s lap (bring your camera) and a cookies-and-cider reception. Tickets may be purchased for the 5 or 6 p.m. hour.