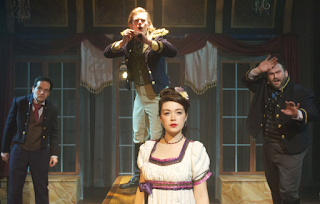 The B Street Family Series has opened an outstanding production of a new version of the “Frankenstein” story, written by B Street associate producer and author of many Family Series plays, Jerry Montoya.

Walking into the small theater and looking at the gorgeous set by Samantha Reno was a hint that the audience was in for something special.

And indeed it delivered on that promise.

A discussion breaks out about ghost stories and whether women are capable of writing one, something about which the men scoff. Mary suggests a contest to see who can write the best ghost story.

The retelling of the Frankenstein tale is effectively handled, with the actors slipping into and out of characters in the story while Mary narrates.

Megan Wicks is simply electric as she paints the picture and characters of her ghost story. Aided by the lighting design of Les Solomon, she strides around the stage, striking dramatic poses that grab the audience and holds them until she moves again.

Solomon’s contrasting lighting for the Shelley home and the Frankenstein story is often subtle, but definitely leaves no question about whether we are in “today” or the fantasy tale of Mary Shelley.

Michael RJ Campbell is expansive as Lord Byron but positively terrifying as the corpse brought to life (though it is interesting how an undead person who can only roar loudly in one scene becomes so erudite in the next!). Campbell simply could not be better in this role.

Bryan Staggers gives a perfect performance as the somewhat effete Percy Shelley, the take-charge ship commander, and the skittish assistant to Dr. Frankenstein in the story itself.

John Lamb has the more difficult task, as a relatively minor character in the drawing room gathering, then the power-mad scientist discovering the “philosophers stone,” said to give immortality, and finally the terrified man who doesn’t know what he has created or how to stop it.

His experiments are aided in no small part by the special effects of beakers that bubble over in various colors and pots that smoke on cue. Good work on the part of technical director Steven Schmidt and his crew.

Altholz, who looks like she just stepped out of an old fashioned cameo portrait has less to do in her role as Claire, but does it very well nonetheless.

In an age where “The Walking Dead” is one of the most popular shows on television these days, “Frankenstein” is timely, and Montoya’s well written script gives lots for the adults in the audience to enjoy and enough scary stuff to delight the kids.
Posted by Bev Sykes at 9:57 AM