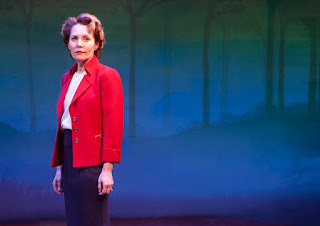 “Blackberry Winter,” a new play by Steve Yockey currently at Capital Stage, is essentially a one-woman show (with two additional actors who play very minor parts), about a woman trying to deal with her mother’s progressing Alzheimer’s disease. It is one act and runs about 90 minutes.

When I read the director’s notes before the play started and read “… this becomes the crux of Vivienne’s battle as we watch a powerful, driven and self-confident woman slowly crumble under the weight of her inability to fix what is wrong with her mother…” I readied myself for an emotional roller coaster and wondered if I had enough tissues with me.

But this play, directed by Capital Stage co-founder Jonathan Williams, is anything but depressing. Vivienne (Amy Resnick) is powerful, funny, sarcastic, emotional, a bit vulgar (but not much) and so perfectly embodies the jumbled emotions of someone who is dealing with a much-loved mother who just isn’t the mother she remembers that this show will resonate with anyone in a similar situation.
(And if you are not dealing with dementia, you will find the show very funny — and also very moving.)

“I don’t drink, but lately I’ve become jealous of people who do,” Vivienne confides to the audience, as she plunks another quarter into a big piggy bank because of using bad language. She has some extremely witty lines, but is the humorous tone real? “This smile is made of granite,” she says, a fake smile on her face.

Most of the play is a conversation with the audience. Resnick strides onto the stage, wearing a power suit and a lovely scarf at her neck (scarves take on major significance as the show progresses) and immediately looks out into the audience, makes eye contact, and starts to talk about an envelope she has just received from the assisted living facility where her mother resides.

She knows that they are writing to tell her it’s time to move Mom to a nursing home “which is quite simply outside my sphere of understanding at this moment.” She wants the best for her mother and knows that having to give up yet another bit of independence by moving is going to be very painful for her mother.

The set, designed by Williams, shows a collection of pedestals of different heights, scattered around the stage. Each contains an item of importance to Vivienne, things like a tiny wooden horse, a bottle of iodine, a pile of silk scarves, a gardening trowel, etc., things that will become props in part of the explanation of the person her mother was, or now is.

Dan Lydersen is credited with animation design, to illustrate an original myth that Vivienne has created to try to explain Alzheimer’s to herself and “why this horrible disease exists.”

The back wall becomes a screen on which is performed a three-section shadow puppet story with the help of Mole (Jacob Garcia) and Egret (Sara Lynn Wagner). The animation part of the play is less successful than the monologue itself, but the figures are lovely.

This is a “must see” for anyone dealing with dementia, and a “should see” for others who love good theater.
Posted by Bev Sykes at 11:49 AM