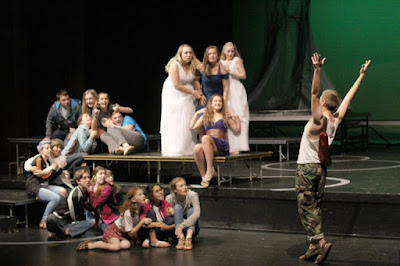 Acme Theatre Company opened one of its stronger productions this week.

“The Odyssey,” an irreverent and witty version of Homer’s classic tale by Mary Zimmerman, is directed by Alicia Hunt, former Acme member, who made an amazing impression in her one-woman show, “Grounded” at B Street Theater two years ago.

“I’ve worked them very hard,” Hunt said, and it shows. This is a strong cast and other than the vocal projection problems in some of the actors, always an issue with Acme, the production is very good.
Don’t expect any help from the program, though. The names appear to have been printed in reverse alphabetical order with no rhyme or reason as to who comes on stage when. Unless a character is called out by name (by someone who can project), it is impossible to know who is who, especially in a dark theater.

And it doesn’t help that there is a typo in the program. Two are listed as Zeus/drummer, when Giancarlo Gilbert-Igelsrud is the only drummer. His drumming is essential to creating many of the scenes. He’s a treasure, with the very best costume of the night. All percussionists should wear flashy gold.

But enough of the complaints. The show opens when McKella van Boxtel walks on stage as a tourist trying to get the history straight and is transformed by two muses (Cassidy Smith and Emma Larson) into the character of Athena, who will help Odysseus (Ryan Johnson) through his travels home from the Trojan War, which ended 10 years ago.

Van Boxtel does a wonderful job, a master of disguise who becomes the ever-present being in Odysseus’ journey.

Odysseus is eager to get home to his wife, the patient and wise Penelope (Garnet Phinney), but Poseidon (Mez) is holding a grudge and refuses to let the hero return home. Penelope spends the show fending off suitors.

Johnson gives a powerful performance as the tortured Odysseus, whose return home involves encounters with characters like the enchantress Circe, the goddess Calypso and the Sirens, beautiful creatures who lure sailors to their death by their singing (Gracelyn Watkins plays both Circe and Calypso as well as one of the Sirens).

Waiting at home with mama Penelope in Ithaca is Odysseus’ son Telemachus, played by the Chris Colfer look-alike Grey Turner. At only 14, Turner is one of the youngest in the cast, yet gives one of the strongest and most memorable performances. This young actor is going to be a pleasure to watch as he moves through his time with Acme.

There is also an absolutely fabulous Cyclops eye for which the tech crew gets high praise.

Odysseus takes this journey home with his BFF Eumaeus (Rocket Drew) who is there at the end to get rid of Penelope’s many would-be suitors and convince her that Odysseus is, indeed, finally home.
This is a perfect show for high school-age actors. As director Hunt says “they are enduring experiences that high schoolers viscerally understand: loss, isolation, searching, adventure and, above all, the pain and beauty of love.

We are very fortunate in Davis that we have such an organization as Acme, which can get high school kids excited about learning the classics and working so hard to bring them to life.
Posted by Bev Sykes at 8:59 AM