Who's Afraid of Virginia Wolf? 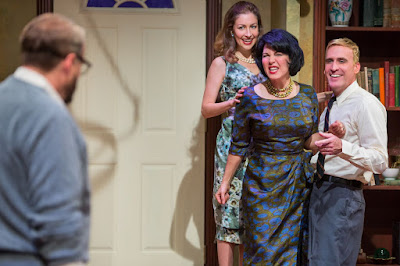 Edward Albee’s “Who’s Afraid of Virginia Woolf” is an American classic, first produced in 1962, winning the Tony and Drama Circle award for best play, the Pulitzer Prize for best play and Tonys for its stars.

In 1966 it was made into a movie, starring Richard Burton and Elizabeth Taylor, and is one of only two films to be nominated in every eligible category at the Academy Awards, winning five awards. It is preserved in the U.S. National Film Registry by the Library of Congress as being “culturally, historically or aesthetically significant.”

It’s heavy history for a local theater company to take on, but B Street Theatre is up to the challenge. Director Dave Pierini confided to the audience before the play began that to get permission to do an Albee play, the Albee estate has to approve the actors, the director, the stage design, costumes, etc. — so it is a real privilege to be given the rights to do this play.

The B Street production does not disappoint.

This story of George and Martha, the Bickersons of the 1960s, is an intense look at a marriage that appears to be falling apart, but what holds the couple together is their hatred of one another, and a dark secret they are holding that binds them to each other. Watching them go at each other for three hours (with two intermissions) is exhausting, but at the same time exhilarating.

Kurt Johnson and Elisabeth Nunziato are simply marvelous. Martha’s father is the president of a college and George is a professor in the history department (not the head of the department, Martha is fond of reminding him, as a way of putting him down).

It seems that everything she says has the intent of evoking some sort of a response from him that will lead into a further argument.

George is henpecked and knows it, but he can give as much as he receives in the verbal sparring with his wife. Both know how best to hurt each other and don’t hesitate to do it.

The play begins at 2 a.m. when George and Martha have just returned home after a party, obviously feeling the effects of the liquor they have consumed. Martha confesses that she has invited a new professor, 20-something Nick (Jason Kuykendall, Nunziato’s real-life husband) and his wife Honey (Dana Brooke) to drop by.

Nick and Honey aren’t quite sure what they are doing there so late at night, but the four consume massive quantities of alcohol. I was mostly impressed with Kuykendall, who got drunker and drunker very convincingly, while the others went from sober-sounding to drunk-sounding quickly.

Kuykendall’s reaction was not only in the slow slurring of his speech, but the changes in his body language, too.

The more he drinks, the more he drops the innocent young professor persona and displays his disdain for George, who has been at the college for years and still has not risen to the head of his department.
Honey, on the other hand is more childlike and in awe of George and Martha, but physically affected more and more as the arguments escalate. She also begins to realize that as much as George is a source of Nick’s contempt, so, too, is she. One wonders if in 20 years they will be the George and Martha of the campus.

Martha uses Nick to mock George by making sexual advances to the younger man, though after a tryst in the bedroom, she is not above pointing out that he is sorely lacking in his sexual prowess. George insists that they all play a game, a grotesque game that leave all four stripped bare.

The play comes to a dramatic conclusion with an agonizing monologue by Martha, performed by Nunziato with heart-rending authenticity.

Albee died in 2016. With the finicky restrictions on productions of his works, continued by his estate, one can only think that even he would be proud of this production.

The audience should be aware that herbal cigarettes are smoked throughout the evening.
Posted by Bev Sykes at 10:24 AM