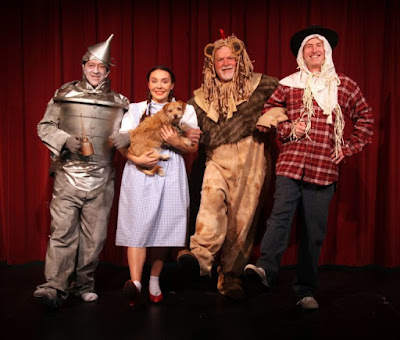 Despite the slow pace and the interminable set changes, I had more fun at the Winters Theatre Company’s production of “The Wizard of Oz,” directed by Anita Ahuja than I have had in a long time.

For starters there is perhaps the largest cast I have seen on the Winters stage (more than 30), including the Munchkin Hinojosa brothers, one of whom was a baby in a carrier, and the other a toddler, who had us all laughing when he escaped and ran off the stage.

Another favorite was Tibby Williams, as Toto, who had more on-stage time than most Totos do, and who, other than a few unexpected barks, was surprisingly good, though you could tell when the members of her real family came on stage in costume because her tail would wag furiously.

Alexis Velasquez was a perhaps too tall Dorothy, though she had that wide-eyed wonder one expects from a girl whose house has swirled through the air and landed her in a strange land. She also had a beautiful clear voice.

There must be something about putting a bizarre costume on an actor to bring out the best in them.  A case in point was Eleanor Yeatman, as Miss Gulch and the Wicked Witch.  Paint a girl’s face green and watch her eat the scenery.  She was absolutely marvelous.

Likewise, this may have been the best performance I have seen by Jim Hewlett as the Scarecrow.  He was completely comfortable in his wobbly body and became a great friend to Dorothy.

Robert Williams (from Tibby’s family) was a wonderful Cowardly Lion and even offered a pretty credible Bert Lahr during his “If I were king of the forest.”

A find for Winters was Loren Skinner, in his first ever theatrical performance, as the Tin Man.  He had the kind of voice that makes you sit up and wonder “where has this guy BEEN all these years?”  I hope we will see more of him on the Winters stage.

Elizabeth Williams was a younger than expected Glinda, the Witch of the North, but she was warm and wise in helping Dorothy when she needed help.

(Rounding out the Williams family was Jason Williams as Nikko, the Monkey Commander, who was a credible slightly evil sidekick to the witch, and also one of the mean apple trees.)

In lesser roles, Debra DeAngelo made the most of Auntie Em, a strict, no-nonsense farm woman, whose warm side shines through when she insists the farm hands have cookies so they don’t have to work on an empty stomach.  Her best, though, was her appearance inside a big glass globe while Dorothy is locked in the witch’s castle.

[picky aside: Dorothy refers to her consistently as “Aunt Em” instead of ”Auntie Em,” which grated on my nerves until the end of the show when she finally called her Auntie.]

Jesse Akers was fine in the small role of the gruff Uncle Henry,

Tom Rost was a professorial Professor Marvel, and the Wizard.  He was wise in dealing with run-away Dorothy, and with granting the wishes of Dorothy’s three companions.

The young actors playing Munchkin, Lullaby League, and Lollipop Guild were well rehearsed, disciplined and sang well, as well as being very cute.  Josh Masem and Kenneth Matheson were notable as the Mayor and Coroner, respectively.

Ahuja decided to add back the Jitterbug, a number which had been cut from the movie and the dancers, Mikenzie Hapworth Eldridge, Elizabeth Williams, Julia Berrelleza, Christian Duran, Manny Lanzaro and Kenneth Matheson made fun work of the bugs dancing around.

The set for most of Oz (designed by Gary Schroeder) was pretty minimal, but there was a nice, solid farm house for the Gale family and a great storm cellar for protection from the approaching storm.  A nice touch was the lantern on the house porch, which swung wildly in the wind, without visible help from anyone.

It was a full house for opening night and we all had a wonderful time.  This was the first in-theater production since the death of co-founder Howard Hupe, whose presence was missed, and who was honored briefly before the start of the show.