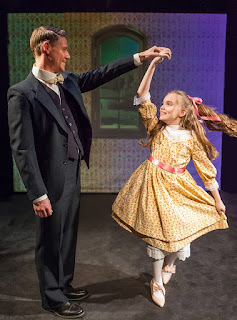 In these days of #MeToo and horror stories of sexual misconduct, Capital Stage’s choice of Jennifer Haley’s “The Nether” is either perfect, or the worst choice ever, depending on your reaction to the play.

Literary manager Cathy Hardin warns that during the first three days of rehearsal, the most prominent words and phrases used by the cast were “wildly uncomfortable,” “rough” and “worried.”

The winner of seven Los Angeles Ovation Awards and the Susan Smith Blackburn Prize, “The Nether” is described by The Huffington Post as “dark, disturbing and extraordinary … a cold, hard look at human behavior.”

Reaction from two patrons after the show: “I hated it” and “I don’t know what I just saw, but I loved it.”

This is a show about which you can’t be neutral.

It would do a disservice to patrons to give too much away, since “discovery” is part of the experience, but the premise is that an admitted pedophile has created a virtual realm called The Hideaway, a Victorian setting where people with deviant sexual urges can satisfy them with virtual children, without injury to anyone in the real world.

Sims (Tim Kniffin), who runs The Hideaway, admits that he has “always been sick and there is no cure.” He then explains that “I have taken responsibility for my sickness. … The only way I can do this is because I’ve created a place where I can be myself.” He is being questioned by Morris, a female detective (Imani Mitchell) who is trying to find the location of Sims’ server so she can shut it down.

“Are you accusing me of creating pedophiles? If anything, I’m giving them a place to blow off steam,” Sims says.

“You foster a culture of legitimization, telling them their desires are not only acceptable, but commendable,” Morris replies.

That this production works so well is due to an exceptional cast. In addition to Kniffin and Mitchell, Graham Scott Green is Doyle, an older man who is a frequent visitor to The Hideaway (who is considering leaving the real world and moving permanently), and Jeb Burris, as Woodnut, a new guest.

Outstanding is Kylie Standley as Iris, the girl whose function is to interact with the guests. Standley’s Iris is a beautiful, vivacious 9-year-old android with a smile that lights up room, who longs for a birthday cake and loves to dance. She is also, we discover, in charge of what happens in her frilly pink-decorated bedroom.

Timothy McNamara is the scenic/lighting designer who has created two decidedly different worlds. In the “real” world, everyone dresses in grays and whites, the walls are gray, the furniture is gray, the lighting is muted. The only color is on the faces of the people living there.

When one crosses over into the Nether, there is a psychedelic multi-colored design on movable panels opening to reveal the brightly lit, colorful world of The Hideaway. We know immediately we aren’t in Kansas any more!

(Kudos also to the technicians who change the sets. They are as crisp as a dance troupe.)

“The Nether” is certain to provoke conversations. Is modern technology the answer? Can you excuse the criminal activity if no real person is hurt? Are the characters we would find abhorrent in this life sufficiently sympathetic that we can understand their attraction to The Hideaway as a way to keep from hurting people in the real world?

This is a provocative, powerful and deeply disturbing play, directed by Kirk Blackinton (new to Capital Stage), which explores the consequences of living out one’s private dreams.

Hardin suggests approaching the play with an open mind: “Instead of us deciding that something is right or wrong, why don’t we look at the motivations for why people do things, instead of just judging their actions,” she says.
Posted by Bev Sykes at 6:48 AM