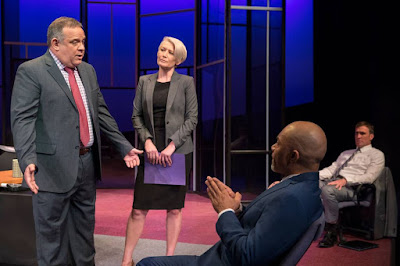 The program for Sarah Burgess’ “Dry Powder,” newly opened at B Street theater, contains a one page glossary for many of the terms used in the Wall Street-based play.  Things like LPs (Limited Partners), IPO (Initial Public Offering), and Dry Powder (amount of cash reserves or liquid assets available to a private equity firm).

Critics get a packet in which there are five pages in the glossary, which gives you the idea of what an insider-rich play this is.

The action centers around KMM Capital Management, which is in the business of overhauling businesses (“buy companies, increase their value, then exit”).

Things get complicated, but what makes this production extraordinary is the first rate cast of B Street regulars.  If you want to insure a top notch production, cast Dave Perini, Melinda Parrett, and Jason Kuykendall.  This year B Street has added Jahi Kearse as another regular and it’s easy to see why.

We first meet Perini as Rick, the head of a Wall Street firm who has just received news that one of his best customers is moving his business elsewhere following a lavish engagement party (there was really only ONE elephant) Rick held at the same time the company was announcing layoffs at a grocery store chain it had bought.  Rick is nearly suicidal.  Jenny (Parrett) is there to literally talk him off the ledge while Seth (Kuykendall) arrives with a brilliant idea for taking on a new business.  He has been sweet talking the head of a luggage business (Kearse as Jeff).

(With all the on-stage costume changes, meetings over cocktails, etc., kudos are deserved by the unnamed technician who so smoothly wheels costume racks in and out and mixes drinks for whoever needs them)

Jenny and Seth have different ideas about the new merger.  His is in keeping with the desires of Jeff and will keep business in the US and ensure that his employees will keep heir jobs.  Hers fires all the employees, ships the business overseas and makes lots of money for everyone.  Her plan also threatens the merger completely, since Jeff is so dedicated to the fate of his employees.

The back and forth among all the characters is perhaps predictable, if the solution is not, but it is the acting that raises this dramady above average.

Perini is perfect as the mercurial Rick, Parrett plays one of the ice queen roles that she does so perfectly, while balancing on impossibly high heels–it’s all the bottom line, and who cares about the little people hurt in the process?  Kuykendall is the guy with the morals, who cares about what happens to everyone, who wants to be fair to the luggage company, while still saving KMM, just not as grandly as Parrett’s proposal.  Kearse is the guy caught in the middle, between his devotion to his employees and the lure of the big bucks.

Kuykendall and Parrett have a hilarious argument which descends to who had the higher G.M.A.T. score (the business school entry exam).

The bottom line of this play is...the bottom line...and learning that most of the folks who work in the business world are more interested in higher finance than the well-being of the little man who got them where they are.