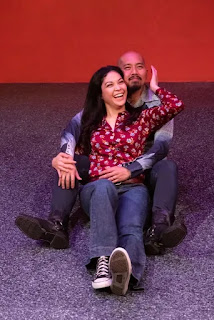 Some time ago, I was chastised by a reader for not warning of “adult language” in a production. So let me say at the outset that if you are upset by adult language, you want to skip “Vietgone,” now at Capital Stage. But if you do, you will be cheating yourself out of a very special theatrical experience.

Is this the new look of American theater? It’s a hilarious comedy that can move you to tears in emotional moments. It’s not a musical, yet entertains with “Hamilton”-esque rap numbers. In place of actual sets, there are projections that enable the story to flip back and forth in time and place and include video news footage from the war era. It even includes a fantasy ninja warrior battle.

While it is contemporary in its examination of stereotypes (both Americans and Asians), and the treatment of immigrants following the Vietnam war, it certainly echoes life today.

As Producing Artistic Director Michael Stevenson completes his welcoming message, he announces that a “special guest” will also speak. Actor David Crane introduces himself as the playwright Qui Nguyen and begins to give an explanation of what might seem confusing about the play, which he describes as an “action sex comedy.”

He explains that though we hear the characters speaking English, they are really speaking Vietnamese and when an American character appears, you’ll know he is American because he will spout American nonsense like “Yee Haw! Get’er done! Cheeseburger, waffle, fries, cholesterol, NASCAR, botox, frickles,” the translation of which will be obvious by the response from the Vietnamese. It is an interesting switch of life and history from the Vietnam perspective, which we rarely, if ever, see.

The story centers on two characters, Quang (Jomar Tagatac), a helicopter pilot during the Vietnam War, who was unable to bring his wife and two young children out of Vietnam and longs to return, and Tong (Rinabeth Apostol), a Vietnamese refugee, whose fiancée was left behind in Vietnam and she whom knows she will never see again.

Tong came to America with her sharp-tongued mother, Huong (Michelle Talgarow), with strong feelings about America, American food, how Tong should act and the men she should date. Talgarow also plays several other characters, as do Anthony Chan and the aforementioned David Crane.
Quang finds a dilapidated motorcycle, which he repairs and, with this friend Nhan, heads for California. Along the road, the two have one of the funnier sequences, when they taste burritos for the first time and decide that maybe not all American food is terrible.

Kudos to, I assume, Christa Kinch, who gets credit for Properties Design, for the great motorcycle which is ridden all over the stage throughout the play.

For Quang and Tong, it is lust at first sight and their relationship is strictly a physical one until they begin having feelings for each other, something both of them fight.

Director Jeffrey Lo has a deft hand at letting the relationship between the two grow until we see the inevitable — Quang’s conversation with their son some 20 years later.

The play gives the audience a chance to witness American culture as seen through the eyes of immigrants, to hear that for the immigrants the war is over and done with and they are moving on, while Americans hunger for more and more details about what happened in the past.

“My life is more than the eight years I fight,” Quang tells his son. “All I hear is politicians using Vietnam as a symbol for a mistake. ‘If the president not careful, this will be another Vietnam.’ This is not how any Vietnamese wants Vietnam to be remembered….let me tell you about the people. But if you only wanting to know about war, then go rent a movie.”

This is a unique production that is well worth seeing.
Posted by Bev Sykes at 10:14 AM