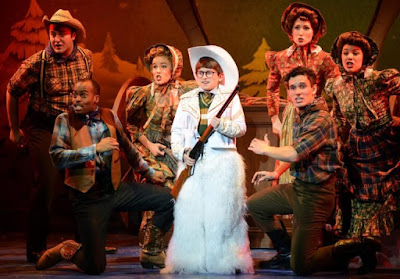 How do you make a favorite Christmas movie even better? Add music to it. It doesn’t always work, but it does for the current production of Broadway on Tour.

From the moment the colorful title curtain rises, revealing the home of the Parker family, the musical version of the 1983 film, “A Christmas Story,” adapted from the writings of the radio personality Jean Shepherd (Chris Carsten), is a delight. The story now comes with an often catchy score by the young songwriting team of Benj Pasek and Justin Paul.

Broadway on Tour usually performs at the Sacramento Community Theater, but the theater is undergoing an extensive renovation and so this season is being performed at the nearby Memorial Auditorium.

“A Christmas Story” is a fast-paced, lively story that sticks pretty close to the movie. There are 11 grammar-school-aged children in the cast and all are excellent actors, singers and dancers.
Ian Shaw has the role of Ralphie, alternating with Tommy Druhan. He is amazing and his solos bring thunderous applause.

William Colin is brother Randy, who doesn’t have much to say but when he gets out of his snowsuit, we find out that he is a talented tap dancer who brings down the house.

Briana Gantsweg is Ralphie’s mother, a somewhat Stepford-like stereotypical mom of the 1940s, but her poignant song about “What a Mother Does” was beautiful and will hit the heart of any mother in the audience.

Christopher Swan is “The Old Man,” pretty inept at handyman work, but diligent at entering crossword puzzle contests and thrilled when he actually wins “a major award” (unaware that his wife supplied most of the answers for him). It doesn’t matter how weird the award is — it proves he is now a “winner.”

The famous “leg lamp” prize is even funnier when it becomes the subject of a great dance number.
Special mention goes to Hoss and Stella, who play the “Bumpus Hounds” who chase The Old Man across the stage a few times.

Jay Hendrix, as Flick, does a great job keeping his tongue stuck on a flagpole outside the school for an entire scene.

Lauren Kent is Ralphie’s teacher, Miss Shields, who sheds her schoolmarm clothes and dons a hot red dress in a great dance number with Randy as part of Ralphie’s fantasy.

Having been written in 1983, bits of the story are somewhat dated. It is kind of cringe-worthy, for example, to hear Ralphie sing about all the reasons he wants a BB gun, one of which is to protect his teacher in case someone with a gun comes into the school. Oh, the innocent days when this was funny, and not a real concern.

Directed efficiently by Matt Lenz, with choreography by Warren Carlyle, this is a collage of childhood snapshots taken from the exciting month before Christmas, when children dream of a big haul from Santa Claus, even if their desires might “shoot their eye out.”
Posted by Bev Sykes at 4:12 PM