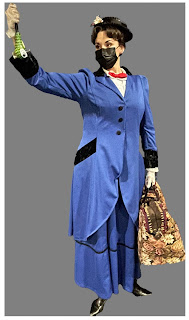 Live theater is back in Davis, and the Davis Musical Theater Company has started its 37th season with a lively, colorful production of “Mary Poppins,” directed and choreographed by Kyle Jackson, with a beautiful set designed by Steve Isaacson. Tylen Einweck is the musical director, conducting the smaller-than-usual DMTC orchestra.

Audiences must show proof of COVID vaccination and must wear masks, and all the actors on stage wear masks, so those thinking of attending this show can feel as safe as anyone can these days.

Jori Gonzales makes a wonderful Mary Poppins, in costumes designed by Denise Miles. She flies gracefully, sings beautifully and has a great relationship with the Banks family, especially the children.

All of the Banks family give strong performances, particularly Joe Alkire as George Banks, who takes control of the stage whenever he is on it. I was even more impressed with his performance when I learned he only came into the show two weeks before opening, when the original George had to drop out for medical reasons. 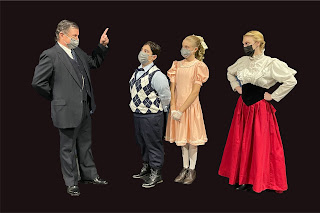 Andrea Bourquin is the perfect wife. When you look at her character, smaller than George and Mary, she just looks like she couldn’t be anything but a wife. She has less to do than the others in the family, but everything she does is perfect.

Ruby Schwerin and Django Nachmanoff are the two naughty children, Jane and Michael. Schwerin in particular is great and her bouncy pony tail curls add to her character.

Amy Woodman is the family’s overworked, stressed maid, Mrs. Brill, and Timothy Blankenship is the house boy, Robinson Ay, both of whom complain about living in a madhouse.

Bert is the chimney sweep who is Mary’s good friend. Judah Dwight is a lot of fun to watch, and is the storyteller of the show. When the children met Bert and are unimpressed with him because of his appearance, Mary teaches them they need to look past appearances and brings a statue to life (“Jolly Holiday”). Jean Henderson is the costume coordinator for this production and the shadows she put on the costumes of the statue (Eduard Arakely as Neleus) make the him look like he really is made of marble. It’s a wonderful effect.

Jennifer Rineman makes an impression in her brief appearance as the bird woman, singing the beautiful “Feed the Birds.”

Beth Ellen Ethridge shows up in Act 2 as Miss Andrew, George’s former nanny, of whom he is still frightened. Though masked, like everyone else, Ethridge creates a unique character with the expression in her eyes. She and Gonzales have a show stopping duet, “Brimstone and Treacle,” which would do justice to any professional production.

The show has some wonderfully colorful ensemble numbers, like “Step in Time” and “Supercalifragilisticexpialidocious,” led by Mrs. Corry, “the oldest woman in the world,” played by Jenifer Goldman.

Tessa Fray is Valentine, Jane’s doll brought to life by Mary to teach the children about playing nicely with others and appreciating the value of their toys.

This is a delightful production, which moves at a steady pace. The only sad thing about it is that for the Saturday-night performance we attended, there were more people on stage than in the audience. I hope the word gets out about the safety of the theater and the quality of the production.