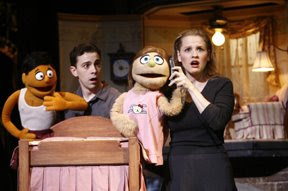 I suspect that Wednesday's opening night performance of 'Avenue Q' probably shocked some members of the audience, who initially may not have believed at what they were seeing.

But the laughter and applause throughout the two hours - and at the end - suggests that everybody adjusted pretty quickly.

At intermission, I overheard a man saying that at the start he was thinking that his 9-year-old grandson would just love the show ... but then, as the show progressed, he began to think, 'Well, maybe not that part.'

But if a hilariously irreverent, R-rated version of 'Sesame Street' sounds intriguing, don't hesitate. Rush right out and see this sparkling, three-time Tony Award-winner while you have the chance.

At its heart, 'Avenue Q' is about love, friendship and making the world a better place. What could possibly be objectionable about that?

The cast is mixed: half puppets, half humans. The puppets all have their human counterparts, as well.

Robert McClure is Princeton, newly graduated from college and possessing a business degree; he has come to New York to take a job. He has been wandering down from Avenue A, trying to find an apartment he can afford. As he takes a vacant apartment on Avenue Q, he learns that he has been downsized ... before his job ever started.

McClure is amazing: an exact shadow image for Princeton, his body filling in the parts of 'body' that Princeton doesn't possess. The two - actor and puppet - move in perfect precision; it's so easy to lose the actor (McClure) in the character of Princeton, that not until the end of the show did I realize that McClure also worked the character of Rod, the 'Ernie' half of an Ernie & Bert-like duo. (They occupy another apartment in the building.)

The amazing Anika Larsen is Kate Monster and Lucy. Kate Monster and Princeton are attracted to each other, but the latter's reluctance to commit to a serious relationship threatens both of them. Like McClure, Larsen shares a one-ness with her puppet, and her singing voice is powerful.

Brian is a struggling comedian who befriends Princeton, and tries to help him overcome the depression that follows his break-up with Kate Monster.

Christmas Eve (yes, that really is her name) is Brian's Japanese girlfriend. She has a heavy Asian accent and a degree in counseling, but the only job she can get is working in a Chinese restaurant. Iwamatsu is a delight with her over-the-top accent, and a voice that suddenly bursts out of nowhere and blows everybody away.

And I would have loved to be part of the writing session that decided to add a Gary Coleman character to the mix. The former child star - now reduced to selling his memorabilia on eBay - is the manager of the run-down building on Avenue Q: a role that is art imitating real life. Thomas has a lot of the actual Coleman's mannerisms down pat, and is wonderful in the part.

The show tackles many problems of the human condition and, with songs like 'Everybody's a little bit racist,' pokes gentle humor at many of our foibles.

In the end, a magnanimous gesture and assistance from the most unlikely of places proves that good can be found everywhere, if you look closely.

I've wanted to see this show for a very long time, and - happily - it did not disappoint.