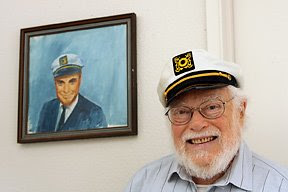 By the time our family arrived in Davis in 1973, Mitch Agruss already was a local celebrity, having hosted Channel 13's afternoon children's television program as 'Captain Delta.'

He held that stint for five years, and then he became Channel 40's 'Cap'n Mitch.'

Our kids and all their friends were fans of Cap'n Mitch. My son Ned remembers winning a certificate to a roller rink in one of the show's contests.

Mara Tyler (then Mara Bernhard) recalls 'being happy when I would turn the TV on and see his face, because it meant that cartoons were on, and not news ... which was the bane of my existence as a kid.'

'I just remember loving him, and thinking what a cool job he had,' Paul Kagiwada said. 'I remember rushing home to watch 'Pow.' '

' 'Pow' basically was a version of Pong,' Ned explained, when I looked blank. 'You got on the phone with Cap'n Mitch, and he put this game on the TV where vertical lines about an inch or so long fell from the top of the screen to the bottom on one side ... then you yelled 'Pow!' into the phone, which would trigger a digital dot to fire across the screen from the other side, in an attempt to hit the line and blow it up.

'If you hit enough lines, you won a prize.'

A friend from Japan, added, 'Cap'n Mitch was a pioneer in developing interactive TV. His show paved the way for the interactive media-technologies we take for granted these days.

But neither these kids nor their parents realized that before Agruss donned his signature captain's hat, he'd enjoyed a long professional acting career that took him from high school drama classes in St. Louis to Carnegie Tech Drama School in Pittsburgh ... and then to Broadway, where he performed with some of the biggest names of the day.

'I had a wonderful mentor in high school,' the 86-year-old actor said, during a recent chat.

This special teacher, watching Agruss perform in high school productions, suggested that he attend a summer course at the University of Iowa. The six weeks convinced young Mitch that he wanted to pursue acting as a career. He applied and was accepted to Carnegie Tech Drama (now Carnegie Melon), one of only two or three drama schools at the time.

'It was the best thing that ever happened to me,' Agruss admitted. 'It was four years of the most concentrated, professional theater in the university atmosphere: day and night theater.'

He worked on the tech crew, learned lights, worked with costumes.

'By the time you were a senior, you were getting good parts.'

But nothing affected him as much as the happenstance of a classmate offering him a summer job, working straw hat theater in Bucks County, Penn. It was 1941, just before the United States went to war.

'It was like Dorothy in 'The Wizard of Oz,' ' Agruss remembered. 'You're living in a black and white, Depression-era world, and suddenly you walk into full Technicolor, because the Bucks County Playhouse was one of the primary playgrounds for all the upper-crust theater and movie people.

'Here I am, 17 years old. I get off the train, and suddenly I'm surrounded by Moss Hart, George Kaufman, Harpo Marx, Louis Calhern, Hume Cronyn and just an extraordinary number of people. Everybody was there. Bucks County, which is Pennsylvania Dutch country, was the place where a lot of these New York theater, movie and radio people had summer homes.

'They used the playhouse, and you were just a part of it. Even if you were a crew kid, you still were invited to all the parties. It was just a knockout.

'But it was hard work. We did 15 shows in 15 weeks. You're playing a show, and you're rehearsing the next one. Visiting stars would come, as they did, traveling the circuit of summer theaters. So I was able to observe this, and I was a good boy ... so everybody liked me.'

Agruss worked with the summer theater for five years - with a two-year break to serve in the Army - and made lots of connections, which served him well when he moved to New York. Within three or four weeks of his arrival in the Big Apple, Agruss was performing on Broadway, thanks to director Ezra Stone, who had a home in Bucks County, and whose wife was a member of the Bucks County theater.

The play was a farce called 'At War with the Army,' and it starred Gary Merrill. Agruss was fresh out of the Army himself, and the right age for the part.

'It transferred me right into the mainstream,' Agruss grinned.

It was the golden age of theater on Broadway. Other shows running at the same time included 'Streetcar Named Desire,' with Marlon Brando; 'Where's Charley,' with Ray Bolger; and 'Anne of a Thousand Days,' with Rex Harrison. Not to mention a host of other first-run plays, which now have become legendary.

Across 45th Street from where Agruss was appearing, a theater featured 'Death of a Salesman,' with Lee J. Cobb and Arthur Kennedy. Kennedy and Agruss became good friends, and walked together after their performances each evening to Grand Central Station, to catch their respective trains home.

For several years, Agruss performed and toured with the American Shakespeare Festival out of Stratford, Conn. His costars included Katharine Hepburn and Alfred Drake, and he retains wonderful memories of those years.

One such memory included being stranded in the Washington, D.C., train station, when a snow storm delayed their train to Boston.

'My family was visiting, and my son was about 3 or 4 years old. To pass the time, he was at a little shooting gallery in one corner of the station: the old-fashioned kind, where ducks go by. He was having some difficulty.

'Katharine Hepburn came by and saw this. She had no tolerance for not being able to do the right thing, and she was annoyed that he couldn't shoot straight. She put him on her knee, and she said 'You will shoot only when I tell you to. Don't shoot until I say 'pull.'' ' There was this little kid perched there, shooting ... and he got them.

'That was exactly the way she was. She couldn't stand inefficiency.'

Circumstances change, and Agruss' contract with the festival wasn't renewed after five years. But an opportunity presented itself in California. It was 1961, and Channel 13 - based in Stockton - had decided to expand its children's market. Agruss moved his family to California and took the job of 'Captain Delta.'

Later, after moving to Channel 40 to become 'Cap'n Mitch,' he had a long run until the 1980s, when programming changed.

Agruss might have gone into retirement, but suddenly 'little theater jobs began popping up.' He returned to his first love, the stage, this time with a different attitude.

'I feel stronger in what I'm doing, because I'm not competing. I'm not a youngster trying to get into something, and hoping I'll make it big. Now it's just a matter of enjoying the craft. Returning to this work at an older age is more rewarding and more fulfilling, the less 'edgy' it is. The only point I'm trying to make is 'Can I still do it?' '

If anyone doubts that Agruss is having the time of his life these days, the answer can be found at Sacramento's California Stage, where he's performing in 'Treasure of the Sierra Madre.' Clearly, the acting chops he learned back at the Bucks County Playhouse still serve him well.

As we sat in his small apartment, surrounded by memorabilia from a lifetime in the theater - a loving cup engraved for him by Katharine Hepburn, an autographed photo of Moss Hart, posters and programs from shows in which Mitch appeared, and a large portrait of Cap'n Mitch - it was very clear that Agruss has followed his dreams and made the most of every opportunity that came his way.

The smile on his face says it all: This has been - continues to be - a great ride, and he's loving every minute of it.
Posted by Bev Sykes at 7:07 PM