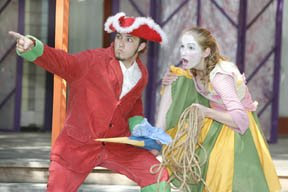 What can you say about the unlikely trio George Farquhar (1677-1707), Thornton Wilder (1897-1975) and Ken Ludwig (1950- )? They are all responsible, along with director Emily Henderson, for bringing lots of fun and belly laughs to the Art Center stage at the Acme Theatre Company's annual (free) spring show.

Farquhar wrote the classic Restoration comedy, 'The Beaux' Stratagem' in 1707. In 1939, it was partially adapted by Thornton Wilder (an Acme favorite playwright), but abandoned with the outbreak of World War II. In 2000, Wilder's 57-page manuscript was rediscovered and, with the permission of the Wilder estate, Ken Ludwig ('Lend Me a Tenor,' 'Sullivan and Gilbert,' etc.) completed the work.

This very funny comedy tells the story of Jack Archer (Torin Lusebrink) and Tom Aimwell (Andrew Lampinen), two men who, having squandered their respective fortunes, are now out looking for rich women to marry. They move from town to town, playing nobleman and servant (switching roles when they switch towns).

When they reach the town of Lichfield, Tom finds himself falling in love with the lovely Dorinda (Kathleen Johnston), who lives with her brother Squire Sullen (Geoffrey Albrecht), who is always drunk and abusive toward his wife Kate (Vivian Breckenridge).

The three live in the home of Lady Bountiful (Lila Hunt), who fancies herself a healer and who ministers to the sick of the town, but doesn't have a clue what she's doing and so botches 'treatment' that nobody will come to her for treatment again.

Tom and Jack settle in at the inn run by Boniface (Kevin Deacon), whose own daughter Cherry (Hope Raymond) is much attracted to both Tom and Jack, but fears they are highwaymen, come to burglarize Lady Bountiful's house.

They share their fears with Gloss (Sean Olivares), a military captain, who is, in reality, the leader of a gang of highwaymen, who use the inn as a place to stash their goods.

Needless to say, with all these plot elements in play and the deft hand of director Henderson at work, many hijinks ensue in this fast-paced farce.

There are also some outstanding performances. It has been a pleasure watching the development of Lusebrink, who is at home on the stage as an actor and whose rubbery body works well for slapstick humor.

Raymond, likewise, continues to get better and better and she sparkles in this production.

Olivares is always a delight and does particularly well in roles like that of Gloss, where he can chew the scenery and make it work.

Breckenridge grows into her role as the play progresses and her interactions with Lusebrink are wonderful.

Lila Hunt is entertaining as the ditzy would-be doctor, whose solution for most ailments is amputation.

Albrecht does an outstanding job as the perennially drunk Squire Sullen.

In the smaller roles of Hounslow and Bagshot, Delany Pelz and Danielle Wogulis are very funny.

In her program notes, Henderson comments that 'somewhere during our design process, the 1980s crept into the staging of the show.' This would be in the interlude music (e.g., Madonna!) which inspires some marvelously funny dance numbers. I assume they are superfluous to the original script, but are traditionally Acme and work beautifully.

Costumes by Raymond are over the top Restoration Comedy, particularly the ladies' oversized hoop skirts. I don't know if Raymond also was responsible for makeup design or if it was a group decision, but the painted and decorated faces are marvelous.

Hanna May is credited with set design, which consists of three arches that are moved around in different ways to represent the inn or several rooms in Lady Bountiful's house. Though there is a certain sameness to them, the signs carried on by members of the ensemble (themselves short, funny vignettes) let us know immediately - well, almost immediately - where we are.

Ryan Lagerstrom is the sound designer and, with all those dance numbers, sound plays an important part and was executed flawlessly.

Acme has pulled off another delightful evening of entertainment. You'll laugh and you'll thoroughly enjoy yourselves ... and it's all for free, so you can't go wrong no matter what!
Posted by Bev Sykes at 2:04 PM