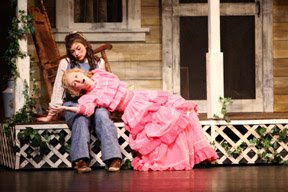 Saturday evening's Mondavi Center audience had the opportunity to witness a bit of Broadway.

No, it wasn't an actual traveling Broadway show, but a UC Davis production of Rodgers and Hammerstein's 'Oklahoma!' that easily would have been at home on a New York stage.

The production's professional quality is due not only to a talented cast, but also to a host of behind-the-scenes contributors, starting with director/choreographer Mindy Cooper, a former Broadway dancer, choreographer and director. Cooper keeps the direction lively, entertaining and spirited, with nary a dead or a slow spot from start to finish.

The story is set in the Oklahoma territory - in 1906, the days just before statehood - and touches ever so lightly on the ongoing feud between farmers and cattlemen. This quarrel definitely takes a back seat to the story of cattleman Curly McLain, who is in love with Laurey Williams, who lives on a farm with her Aunt Eller and the hired man, Jud Fry. Jud has his eye on Laurey; she, in turn, is sweet on Curly.

Tristan Rumery is a perfect Curly. He's tall and lanky, and has the look of a young cowman. He's ill at ease around Laurey (Emma Goldin), but their camaraderie is easy and teasing, and their unspoken love is obvious. Rumery, one of the production's few nonstudents, has a beautiful voice; he sets the tone for the entire show with his opening number, 'Oh, What a Beautiful Morning.'

Goldin has a strong, melodic soprano, and she fills Laurey with the glow of an adolescent in the flush of her first love. She is flirtatious but vulnerable, and a little afraid of all these new sensations.

Allison Minick isn't afraid at all as the hormone-charged Ado Annie, who falls for anybody who will 'talk pretty' to her ('I Can't Say No!'). Minick is delightful.

Annie sets her sights on a traveling peddler, Ali Hakim (Timothy Orr), who makes the mistake of flirting with her and now is stuck with a girl who mistakes his sweet talk for a desire to marry. Orr is wonderful in this role, and he shines in one of the show's lesser-known songs ('It's a Scandal! It's an Outrage!').

The heart of 'Oklahoma!' is Laurey's Aunt Eller (Hope Mirlis), around whom most of the farm activity centers. Mirlis is a feisty Eller, dancin' up a storm with the farmhands, but also present to deliver wise advice when anybody needs it.

The story's dark side comes from the farmhand Jud (Brett Duggan), a loner who lives in a shack down by the smokehouse, where his unrequited love for Laurey can fester. Duggan, a professional comedian in real life, becomes larger than life here: grim and menacing. In his 'Lonely Room,' we glimpse the depths of his anger at those who have kept him on the outside all his life.

Jon Shaffer is adorable as Will Parker, a wide-eyed kid just returned from Kansas City, where he has seen marvelous things that he's eager to share ('Kansas City'). He's not too bright: a man who rides bucking broncos in order to win $50 so he can marry the girl of his dreams ... and then spends all the money on gifts for her, instead of bringing home the cash.

The dance numbers, choreographed by Cooper and Joe Bowerman, are genuine high points. There's nothing quite like seeing an ensemble of cowboys dancing up a storm, or twirling a pretty gal around the big hole in the stage where the orchestra sits.

It's worth noting that traditional productions of 'Oklahoma!' employ substitute dancers for Laurey and Curley during a dream ballet sequence, but here Goldin and Rumery do their own dancing. This adds a special element to the show.

Special mention must be made of lighting designer Tony Shayne, whose Oklahoma skies are breathtaking in spots, and scenic designer Josh Steadman, who creates a perfect farmhouse, and whose seamless set changes are of professional quality.

Costume designer Nancy Pipkin gives a good sense of the era, and the shocking pink on Ado Annie enhances her character nicely.

This 'Oklahoma!' is an outstanding production, and seeing the year's 'big show' on the Mondavi stage is a particular treat.
Posted by Bev Sykes at 3:08 PM