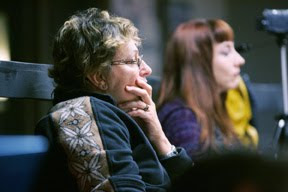 They're highly intelligent and live in wonderfully structured societies. They understand that it takes a village to raise a child. They support each other throughout their lives. They go into deep depressions, if isolated in zoos without companions.

And there's a reverence about them, when it comes to the end of life.

Elephants know when they're dying. They leave the herd and walk ceremoniously to the graveyard that contains all their ancestors, and they lie down in the bones of those who have gone before them.

When an elephant dies, the other members of the herd gather around it: They cover the elephant up, and they hang around it for days, just to be close.

This majestic creature's respect for age and dying was the inspiration for a play called 'The Elephant's Graveyard,' written and directed by Jade McCutcheon, which opens Friday and continues through Nov. 1 at the Mondavi Center's Larry and Rosalie Vanderhoef Studio Theatre.

The U.S. population age 65 and over is expected to double in size within the next 25 years. By 2030, almost one out of five Americans - some 72 million people - will be 65 years or older. The age group 85 and older is the fastest-growing segment of the U.S. population.

It's time to give some serious thought about the quality of life for older Americans.

McCutcheon actually has been working on this piece for a very long time. When I met with her in April, she had begun shaping the script and had started casting the show.

The story concerns Eve, a scientist working for the 'Never Die Institute,' who is developing technology designed to prolong life and ultimately allow us all to live forever. Eve's mother, Esme, a woman in her 80s, is integral to this narrative: Eve has placed Esme in a nursing home and never finds the time to visit.

McCutcheon sought her Esme among the older women of the Davis community. She was looking for 'someone who is able to move across the stage without feeling terrified.' She also needed 'someone the audience could care about.'

When we parted company that day back in April, McCutcheon was about to meet with Donna Sachs, who leads a discussion group for senior citizens. McCutcheon hoped to find her Esme among the women in Sachs' group.

Sachs, a career psychologist interested in personal development in the later years, started her group in 2003.

'I wanted to share some ideas and literature in a seminar,' she said, 'so I invited people to come for a few times and just talk together in a group.'

After the first few sessions, several people were eager to continue, and the group now has continued for more than five years. It has 11 participants; when they heard the plans for McCutcheon's play, eight women expressed interest.

McCutcheon ended up with more than she bargained for, when Claudia Marie became her Esme. Marie wasn't terrified to walk across the stage. She also was willing to learn lines, although she had no stage experience, beyond having watched her parents do some theater work when she was a young child.

McCutcheon then cast five other members of the group - Nancy Juingeman, Lois Grau, Ruth Hall, Doris Beresford and Sachs herself - to be Esme's friends in the nursing home. Each would have a line or two of dialogue, and all would participate in some of the dancing.

Stage manager Reed Martin was 'really concerned' about working with older women who had no stage experience, but he was pleasantly surprised.

'They're really a great group of people,' he said. 'And because of how involved they are, they're very willing to do things for the show. They're really enthusiastic about it.'

'It's great having members of the community involved,' added Bella Merlin, an acting professor who plays the part of Eve. 'It has been absolutely fantastic working with them. They're delightful. Claudia is so open and accessible, and she's so playful as an actress. They all have super energy.'

In September, I went to visit the 'elders' at work with their choreographer, Kerry Mehling. I entered a room to find a group of women, sitting in a semi-circle, looking old, tired and depressed. Mehling was giving them movements to do with their hands, and each movement seemed to be almost too much of an effort.

But when the exercise concluded, their heads came up and the years melted away. They sparkled with delight while talking about their backgrounds, and their excitement at being involved with this play.

This vibrant group of women was the visual representation of all that McCutcheon wished to convey in her play: how the quality of life can be affected by our ability to remain intellectually challenged, lively and active, rather than stuck in a nursing home, at the mercy of the staff, hoping that someone will visit.

'I want this to be a journey where it's a bit of magic, a bit of music, a bit of art, a bit of dance and the issues, and a story that ties it together,' McCutcheon said. 'It's just a platform. This is a voyage of discovery for Eve. Actually, science might be able to create a bio-body, but what are we about life?

'It's worth asking everybody: Is that it?'

'This play throws up all sorts of issues,' Merlin said. 'We'll make people go away and think about lots of things. My character is basically a nanotechnologist, so she believes that we can live forever: that there's enough science out there, and enough investigation happening, that it's only a matter of years before we have the capacity to ensure that we never age. We'll be able to put tiny robots in our systems, which will constantly regenerate the degenerating.

'It's absolutely strange and exciting, and Eve is up against the fact that her mom is dying, and she doesn't want her mom to die. Can she come up with this discovery before her mom dies?'

But Eve misses the point: that her mother is at peace with the approaching end of her life, and is ready to die.

Merlin warmed to the subject.

'She says lines to the effect of 'What would I do for another 70 years in this body? Why would I want to?' My character can't understand that. Surely everybody wants to live forever. Then my character has an epiphany, and thinks maybe she's got it all wrong. Maybe there's a natural flow and order to things.'

Kim Deacon has flown in from Australia, to sing the role of Esme's 'soul.'

'I worked with Jade about 18 years ago, in a play that we devised called 'The Last Room,' ' the singer explained. 'It's a very beautiful piece that combined some text from Tennessee Williams and the surrealist playwright Arabella; I also sang in that play. We enjoyed the process of working together very much.

'We always had in our minds to work together again, so I've kept up with her over the years.'

When McCutcheon was in Australia at Christmas, visiting family, she talked with Deacon about flying to the States to perform in 'The Elephant's Graveyard.' Deacon, who had been discussing the possibility of such a project with McCutcheon for a long time, was happy to comply.

Garrett Ian Shatzer, who composed the songs for the production, happened to be in Australia this summer, while McCutcheon was at home again to see her own aging mother. They met with Deacon at that time, to go over the music.

'When I heard Garrett's music, I thought it was fantastic,' Deacon said. 'Every song is beautiful.'

'It has stirred up a lot of stuff for me, because my parents are in their 70s. They're in the UK; I'm here in the USA. They're fit at the moment. What happens when they're not?'

As I watched the relationship between Esme and her daughter during the two rehearsals I attended, and listened to Deacon give voice to Esme's soul, and watched the evolution in the lives of Esme's friends in the nursing home, I drove home certain that people seeing this play will leave the theater with a lot of things to think about.

And, if they still have living parents, a lot of them will feel like calling Mom or Dad.
Posted by Bev Sykes at 2:25 PM