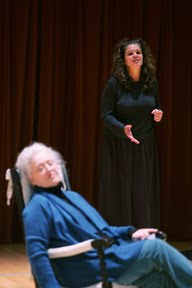 There's much to like about 'The Elephant's Graveyard,' written and directed by Jade McCutcheon, which continues through Sunday at the UC Davis Mondavi Center's Larry and Rosalie Vanderhoef Studio Theatre.

The play boasts a simple yet elegantly sweeping set by renowned designer John Iacovelli; lighting by internationally recognized designer Thomas Munn; an on-stage orchestra, under the baton of Garrett Ian Shatzer, to perform the music composed by Laurie San Martin; costumes by Maggie Morgan; and choreography by Kerry Mehling.

McCutcheon's sensitive script concerns an aging woman and her scientist daughter, who is trying to find a cure for death, yet can't take time to visit her dying mother.

Each of the seven professional and nonprofessional actors is wonderful; they're joined by six older women from the Davis community, with no acting experience whatsoever, whose powerful contribution just about steals the show.

And delivered more than a few in tears during the opening night performance.

Eve (Bella Merlin) is a career-driven scientist working for the Never Die Institute on synthetic alternatives to aging and death. She deals with inter-staff rivalry with her partner Steve (Matt Sullivan), who is involved with stem cell research. Eve is so immersed in her work - and excited about her discoveries - that she neglects her aging mother, Esme (Claudia Marie Maupin), whom she has placed in 'one of the more prestigious nursing homes.'

Eve visits every few weeks, when her busy schedule allows.

Esme is lonely and confused: more concerned about whether she's getting the right medication, and whether the staff has stolen one of her old sweaters, than about lengthening her life.

Emma (Anne Reeder) is the granddaughter Esme raised after the death of the girl's parents. She visits Esme regularly and tries to make Eve understand how precious her time is with her mother.

Merlin does a fine job as a harried, driven, stress-filled woman who tries to do too much while neglecting the one thing that should be most important to her. Reeder gives a lovely, sensitive portrayal of a young woman who successfully balances career - she's an architect - with love and concern for her grandmother.

But our attention is riveted on Esme, and Maupin gives her total heart and soul: We understand her bouts of depression, her moments of confusion and fear, and her delight over the time she spends with her daughter. Ultimately, we learn the most from Esme.

The voice of Esme's 'soul' is provided by the marvelous Australian singer Kim Deacon, who sings the words that reveal Esme's fears:

'Is it must my imagination,
Or am I finding it hard to breathe?
It seems each step I take these days
There's a wobble in my knees...'

Each of the other actors takes on several roles, from nursing home attendants and pedestrians to waiters. Each is excellent, but Jorge Morejon is head and shoulders above the rest: His principal character is a shaman who provides comfort to Eve at her most frenzied period, when he takes her pain from her and internalizes it.

Morejon gives an intensity to his performance, and his dances are breathtaking: particularly the 'spider dance,' done on a ladder that is lowered from the ceiling while Esme's soul expresses her feelings about death:

'The web might be a relief,
Just to give in and get caught.'

As for the 'elders,' for a group of women in their later years who never before appeared on stage, we couldn't ask for better.

They quite realistically portray conditions in a nursing home, and their final scene brought several audience members to tears.

This play needs to be seen by everyone with aging parents, and everyone who intends to grow old (which would be all of us). It deals sensitively but realistically with the experiences of aging in this country, and how our culture deals with it, and concludes with an uplifting message for everyone.

The production is everything that McCutcheon intended: 'a journey where it's a bit of magic, a bit of music, a bit of art, a bit of dance and the issues and a story that ties it together.'

Don't miss this one. You won't be disappointed.
Posted by Bev Sykes at 3:15 PM