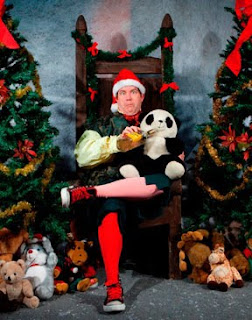 At a time of the year when the world seems full of sugarplum fairies, Tiny Tim, sappy TV Christmas shows and those ubiquitous ho-ho-hos, it's refreshing to stumble on a holiday program that shows the dark side of Christmas.

The Capital Stage production of 'The Santaland Diaries,' directed by Janice Stevens, is a one-act satire written by National Public Radio storyteller David Sedaris, and adapted by Joe Mantello (of 'Love! Valor! Compassion!'). This show is wickedly funny and guaranteed not to send you from the building whistling 'Jingle Bells,' but you may - somewhere - find the true meaning of Christmas.

David, played by Gary Alan Wright, is an aspiring actor who has moved to New York and expects to be working on 'One Life to Live' within weeks. He fantasizes about his introduction to the cast, and practices acting humble when told he has to get used to being the center of attention.

Instead, rejected by the soap opera and desperate for money - and not wanting to stand on the sidewalks, handing out leaflets while dressed as a taco or a digital camera - he answers an ad to be a full-time elf at Macy's Santaland.

The verbal diary follows David through his interview and hiring, his training - during which he is given a copy of 'The Elfin Guide' - and his work in Santa's House, as the elf 'Crumpet.' We learn about motivational cheers - 'Come on you elves, feel good about yourselves!' - and that 'it hurts the mouth to talk with such merriment.'

We get a tour of Santa's Village, including its 'vomit corner,' and learn about high-tech parents who force their kids to sit on Santa's lap to be photographed, even if the tots are screaming in fright. (Anyone who ever has stood in line to see Santa, whether as a parent or as a child, will find someone with whom they can identify here.)

'It's not about the child or Santa or Christmas or anything, but the parents' idea of a world they cannot make work for them.'

Sedaris made his comic debut with 'The Santaland Diaries' on National Public Radio, and was named humorist of the year in 2001 by Time Magazine. Wright is perfectly suited to bring Sedaris' words to the local stage. He's a man of many talents and many faces, and has a natural boyish charm that endears him to the audience. He can be at once sardonic, bitter and even cute.

Gail Russell has designed a great elf costume for Wright.

'I wear red and white striped tights, a yellow turtleneck, a forest-green velvet smock, and a perky stocking cap decorated with spangles,' he explains. 'This is my work uniform.'

Jonathan Williams' set is reminiscent of a child's pop-up book, beginning in a very spare, colorless office. The walls open later to the wonders of Santaland, with lights encircling all the posts of the theater itself, putting the entire audience in Santaland as well.

This isn't a show for tiny tots. But for a wonderfully adult, nonsaccharine Christmas show to take your mind off the sugarplums dancing in your head, 'The Santaland Diaries' is just the thing.
Posted by Bev Sykes at 7:09 PM