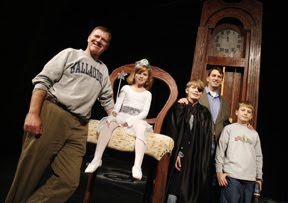 When Greg Wershing watched his 12-year-old son Brycen, playing Herr Drosselmeyer in this year's production of the 'Davis Children's Nutcracker,' climb inside the big grandfather clock, he had a flashback to 1985. That's the year the elder Wershing built that clock, and many of the other pieces of 'The Nutcracker' set.

It also struck him that his son Logan, 10, was the third generation of Wershings to be working at the Veterans' Memorial Theater (Greg's mother Susan Wershing worked tech for more than 20 shows, before she moved from Davis), and the second-generation Wershing to be involved with Davis' holiday tradition.

Both sons Brycen and Logan have been involved with 'The Nutcracker' for years. First, they were performers, and then Logan decided to follow in his father's footsteps and now works on the tech crew.

By 1985, a small group of young people - Chris Wong, Jon Lee, Phil Sequeira, Ned and Jeri Sykes, Derrick Wydick and Wershing, some of whom had come through the performing ranks of the 'Davis Children's Nutcracker' - had grown up and graduated to the tech crew. They had new ideas and were able to see many of them become reality.

Nearly 25 years later, most of those pieces have been replaced, but some still remain. Some of the adults who were once young people are still involved with the show, now watching their own children performing.

'I'm one of the bonafide dinosaurs of the show,' laughs Wydick, who, other than a couple of years when he and wife Laura lived in Fremont, has worked on every show since 1978, when he played Fritz.

'When I was 25, I had no idea this would happen,' says city of Davis Public Relations Manager Bob Bowen, who dreamed up the idea of the 'Davis Children's Nutcracker' and directed it for 10 years. 'I just thought we'd put on a show and 75 people showed up, put on burlap tunics and (we had) cardboard for sets. It's grown from there.'

The Bowen family is the obvious first instance of 'generational involvement.' Bob's wife Kate directed the show for three years. Three of his four children have been involved. Stacey Bowen was a bear, pennywhistle, treat (California raisin and Hershey kiss), Chinese dancer and snowflake. She was a leader for the little party guests, mice and bakers and also did sound for a couple of years and helped out backstage.

Tyler Bowen was the Mouse King, Fritz, a soldier and a gnome. He also worked on the sound and stage crew.

Heather Bowen was a pennywhistle, dancing bear, snowflake and treat. She was a leader for the snowflakes, leads and gumdrops and did stage crew. (Heather now has two children, but does not live in Davis. However, she is moving back to the area and who knows? Perhaps her children will start a third generation of 'Nutcracker' kids!)

Abby Verosub (now Abira Laurie) was a Chinese dancer in her one performance with the show, but she, too, graduated to the tech crew, though her brothers performed for several years. Laurie has returned to Davis after an absence of 23 years and is looking forward to watching her daughter perform in 'The Nutcracker.'

'She's going to be a clown,' Laurie says. 'In my day, we called them the 'rubber chicken brigade.' She's excited.'

Kelly Carlson's sister and brothers danced in 'The Nutcracker' 20 years ago, this year her three children - Kasey, Carter and Grace - will be on the stage.

Marianne Moore coordinated the show for many years as a city of Davis staff member, her younger sister performed, and now her own daughters, Samantha and Ella, are in it.

Wydick began taking daughter Katie to rehearsals when she was 15 months old.

'She was a squirmy little baby, but when the dancing started she would stop moving and focus her eyes on the stage and not move for 45 minutes,' he says.

Wydick brought her every year and the little girl desperately wanted to get on the stage. Now she's finally old enough and will be a snowflake in this year's production. Her plan is to be a flower when she becomes old enough.

Many Davis residents say the 'Davis Children's Nutcracker' is one of the gems of life in this community. It has become a Christmas tradition for many families.

'I'm glad it has been such a big part of my life,' Wershing says. 'I'm glad my kids have the opportunity to experience it before it's gone for good.'

'This has become a crazy institution that is part of growing up in Davis,' Bob Bowen says, laughing. 'It has become a shared experience between parents who once performed in the show and kids who are in it now.