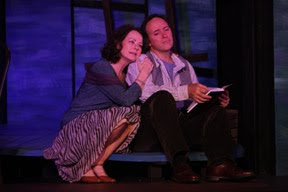 Five minutes or so into Steven Dietz's 'Fiction,' continuing through Feb. 28 at Old Sacramento's Delta King Theater, you'll likely check the program to make sure this isn't a David Mamet play.

Dietz's work is so wordy, literate and rapid-fire that it's easy to confuse the two playwrights.

Two characters - Michael (Eric Wheeler) and Linda (Janis Stevens) - open Dietz's play, as they sit at a Paris café and having a lively debate. They speak with the familiarity of long-time friends. They're so caught up in the rhetoric that they've lost sight of the point of the argument, which they eventually remember is a debate concerning the greatest rock 'n' roll performance ever.

Michael insists it was John Lennon's 'Twist and Shout,' while Linda holds out for Janis Joplin's 'Piece of My Heart.'

As the heated discussion continues, we learn that these two people actually are chance acquaintances, meeting for the first time: an encounter that has escalated into easy familiarity. And as easy familiarity may do, the friendship ultimately escalates into marriage.

Both are writers. Linda, who teaches literary fiction, is the author of one critically acclaimed novel, presumably based on her rape in South Africa. Michael is a more critically successful novelist. Both also are prolific journal writers, with boxes of old journals stored away. These journals begin to unravel their otherwise happy 20-year marriage.

Linda is diagnosed with inoperable brain cancer and given a matter of weeks to live. She asks Michael to read her journals after her death, explaining 'It's ludicrous ... not to mention vain ... to think that they aren't real, that I'm not real unless someone reads them.'

But in exchange for allowing Michael to read her journals, she demands to read his as well.

The resultant chaos, as they explore each other's deepest thoughts, should make people stop and think about how much they really want to know about the significant people in their lives. Is keeping the boundaries of secret thoughts a better thing?

Michael wrote many of his journal entries while living in the same writer's colony where Linda wrote her own novel; he details an extramarital affair with Abby (Stephanie Gularte), a significant person in Linda's life as well, who runs the colony.

But are Michael's amorous adventures with Abby authentic ... or has he embellished them?

As the play - and the reading of the journals - progresses, the action moves forward and backward in time, between real and imagined events.

While listening to the contents of the journals, audience members must decide whether to believe these accounts of the past, as the narrators describe them. This tension between trust and suspicion - between fact and fiction - is the heart of the drama.
Posted by Bev Sykes at 2:21 AM