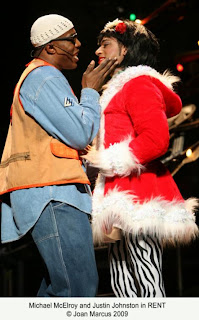 From the ovation that went up from the Sacramento Community Center audience, as the actors took the stage for the opening performance of the Broadway tour of 'Rent,' and the tumultuous applause that greeted the first few notes of many songs, it was obvious that 'Rent-heads' had turned out in force for this production.

And were ecstatic to be there.

It's tragic that composer/lyricist Jonathan Larson never lived to see the phenomenon that 'Rent' has become. He died of aortic dissection caused by Marfan's syndrome on the morning of Jan. 25, 1996; the show opened for its off-Broadway run that night.

'Rent' played to sold-out houses, and its run was extended until April 1996, when it moved to the larger Nederlander Theater; it subsequently became the eighth-longest running show in Broadway history, and grossed more than $280 million.

It won every major best musical award, including the Tony, as well as the Pulitzer Prize for drama.

Tours of 'Rent' have criss-crossed the country almost continuously since late 1996. It has been translated into every major language and performed on six continents. The show had such a loyal following in New York that the term 'Renthead' came to be used to describe fans who would line up for hours in advance, just to get the $20 rush tickets; they subsequently boasted of having seen the show dozens of times.

One obsessed fan claims to have seen it more than 1,100 times during its 12-year run.

'Rent' is an updated version of Puccini's opera, 'La Boheme,' the music from which is played in brief interludes throughout the show. It tells the story of a group of impoverished young artists and musicians who struggle to survive and create in New York's Lower East Side, under the shadow of AIDS, at a time when drugs are plentiful.

The building in which they've been living has been sold along with the lot next door, which is inhabited by a group of homeless people. The new owner plans to clear the homeless off the land and evict the tenants from the building, so he can erect a high-tech cyber arts studio.

The people stage a protest; a riot erupts.

How the tenants break back into the building, and then spend the rest of their year, is the substance of the story.

This touring Broadway production features a stellar cast, starting with Anthony Rapp and Adam Pascal, who created the roles of filmmaker Mark Cohen and songwriter Roger Davis, respectively, in the original 1996 production. Now, 13 years later, the actors have returned to the show, along with Gwen Stewart, the featured soloist in the haunting 'Seasons of Love.'

The actors may be 13 years older, but they still bring the necessary youthful, idealistic enthusiasm to their roles.

Justin Johnson, who performed in 'Rent's' final night on Broadway, is the heart and soul of this production. He plays Angel Schunard, a gay drag queen dying of AIDS. Johnson is tender during his love scenes with Tom Collins (Michael McElroy), and deliciously outrageous in his dance numbers.

As for McElroy, his tender ministrations to Angel, during his final days, will break your heart.

Lexi Lawson, one of the few cast members new to her role, plays Mimi, an exotic dancer and drug addict who contracts HIV.

Maureen is bisexual; her girlfriend, Joanne Jefferson (Trisha Jeffrey), is a powerhouse of a rabble-rousing attorney.

From the speed with which the cheering audience leaped to its feet, as the show concluded, it's safe to say that this production more than satisfied the Rentheads.

And it probably won over a lot more converts to the cult following, as well.
Posted by Bev Sykes at 9:21 AM