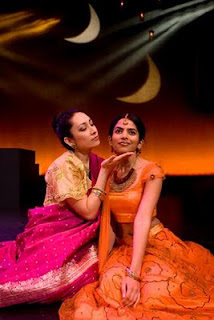 The play was presented on the smaller of STC's two stages, with a cast of two talented actresses and four dancers.

For STC's current season, Shannon has revisited and expanded her original production to include classical Indian mythology. She also has added works by one of India's greatest poets, Rabindranath Tagore, to provide the literary voice for the Hindu deity Shiva and the Hindu goddess Parvati.

Shannon has blended the writings of Tagore and Divakaruni with three distinct styles of choreography - classical Indian, Bollywood and American modern dance - by Tyler Russell Warren. Some of the resulting story is told through movement, some through language, and some through movement and text.

Shannon dramatized one story, 'Clothes,' from Divakaruni's collection; it concerns Sumita, a young woman from Calcutta who is about to be married to Somesh, currently living in the United States and part owner of a 7-11 store. We never see Somesh, but Roshni Shukla - who made her STC debut in the earlier production of this play - is adorable: always on the verge of giggles of repressed delight, at the thought of the marriage that awaits her.

She and Somesh exchange letters, and though Sumita won't see him until their wedding day, she's a young girl in love; she can't wait to meet her husband.

Shukla's Sumita is at once shy, flirtatious and nervous during the ceremonials surrounding her nuptials, straddling the lives of a young girl and a newly married woman. She moves effortlessly into her role as wife and new American, as she becomes excited about the fresh sights, sounds and values of her new country.

The stark contrast between the United States and India is apparent in Sumita's assessment of clothing. The full, rich life she led in Calcutta centers on fabric and flowers, the scent and feel of things.

'I love the color: the same pale blue as the nayantara flowers that grow in my parents' garden,' she says, while trying on her first pair of American jeans.

She speaks of the orange T-shirt that - to her - is a color of joy, symbolizing her new American life.

When life takes an unexpected turn for the happy young bride, she's faced with a choice between her native culture and her new life in the United States. This is symbolized by the choice between a sari or 'a blouse and skirt the color of almonds.'

Katherine Cristina Miller, last seen as Brooke in 'Noises Off,' portrays the goddess Parvati, Sumita's mother and other supporting characters, and does so competently.

Warren's choreography makes this production a giant step up from its 2004 predecessor. Patrons who might not have heard of 'Bollywood' even a few years ago, prior to the attention granted the film 'Slumdog Millionaire,' now are quite familiar with this style of dancing ... and the dance sequences in 'Arranged Marriage' are a delight.

Many of the 14 dancers come from STC's Young Professionals Company, and they're good examples of this program's quality.

At its core, though, 'Arranged Marriage' is the story of a young girl falling in love and marrying, and then learning that dreams - no matter how strongly we hold them - can be shattered.

It's a very affecting tale, well re-told in this Sacramento Theatre Company production.
Posted by Bev Sykes at 10:51 PM

How is your marriage going? Be honest... how is it ACTUALLY going?

If you’re reading this e-mail right now, then chances are your marriage isn’t what it used to be… and maybe it’s so bad, that you feel like your world is falling apart.

You feel like all the passion, the love, and romance have completely faded.

You feel like you and your partner can’t stop yelling at each other.

And maybe you feel that there’s almost nothing you can do to save your marriage, no matter how hard you try.

You CAN save your marriage — even if your spouse says that they want a divorce.

If you feel like your marriage is worth fighting for, then do yourself a favour and watch this quick video that will teach you everything you need to know about salvaging the most important thing in the world:

==> Save Your Marriage Now (VIDEO)

In this video, you’ll learn the 3 critical mistakes that most couples commit that rip marriages apart. Most couples will never learn how to fix these three simple mistakes.

So if you feel like your marriage is about to take its last few breaths, then I urge you to watch this quick video:

> Make Your Spouse Adore You Again <

You’ve got nothing to lose.

PS. Just take 3 mins to watch the video.. if you don’t, you may miss the one tip that could save your marriage. > Click Here: <