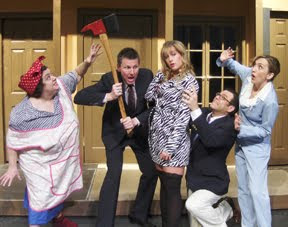 If Michael Frayne's 'Noises Off' isn't the funniest play ever written, it's definitely in the top five.

And the production at the Woodland Opera House, directed by Bob Cooner, may be one of the funniest versions of an already hilarious comedy.

This very physical farce traces the actions of a hapless British touring theater company, in three acts: from final dress rehearsal of a play called 'Nothing On,' to a performance a month later and then another two months after that.

A lot of sardines are involved.

The play requires impeccable, split-second timing, incredible agility, a breakneck pace and - even for an American cast - a proper British accent.

The Opera House production gets high marks on all points. This particular cast is a cut above most others, thanks to the degree of intensity and electricity from everyone: energy that practically leaps off the stage, from start to finish.

The production begins with the dress rehearsal for a play, 'Noises On,' which is opening the next day. Bob Roe is perfect as this show's director, Lloyd Dallas, who sits in the audience and despairs of ever getting things right in 24 hours.

Martha Omiyo Kight plays Dotty Otley, an aging actress who has invested heavily in this show: not only because she wants one last hurrah, but also because there seems to be something between her and a fellow actor.

Kight is delightful as the appropriately named Dotty. She has huge, expressive eyes that serve her character well, especially when she looks around, somewhat lost, trying to remember where she should be, what she should be doing ... and what her lines are.

Craig Howard is brilliant as actor Garry Lejune, who never seems to finish a sentence, but gets his meaning across with body language in hilarious fashion.

Amelia Van Brunt plays the ditzy blonde, Brooke Ashton. Her performance is worthy of Suzanne Somers, both as Brooke and as her character, Vicki. She spends much of the time wandering around in a pink bustier, which complements her nicely.

Jim Lane is the equally ditzy Selsdon Mowbray, and it should be noted that this character's ditziness is augmented by the spirits he secrets around the stage. I've seen Selsdon played many ways, and Lane's rather vague 'not quite there' interpretation is spot-on.

Patricia Glass is Belinda Blair, the company's peacemaker. She knows everybody's secrets, and works tirelessly (against all odds) to keep things calm and organized.

Matthew Abergel is the mild-mannered Frederick Fellowes, susceptible to nosebleeds at the mere mention of violence. Despite this, he manages to experience several pratfalls throughout the evening.

Andrea Guidry's stage manager, Poppy, shines in Act 2, which is almost more mime than recited lines. This middle act takes place during a matinee performance one month later, as seen from backstage, when the cast has been together long enough that interpersonal relationships are starting to interfere with their work. Guidry is suitably harried by the actors' antics, while struggling with her own personal problems.

We also see more of Tim (Matthew Dan Sattel), the company's 'Lord High Everything Else,' who builds (and repairs) the set, runs errands, serves as the bookkeeper, works backstage with Poppy, and in his spare time understudies all the male roles. Tim's Scottish burr adds to his character's appeal.

By Act 3, the tour has fallen apart and everyone just tries to survive the final performance ... which they barely do. It's hard to know whether Act 2 or Act 3 is funnier.

In both cases, a lot of sardines are involved.

Congratulations are due set designer Jeff Kean, for creating a beautiful, rock-solid set that looks huge, but can rotate from the Act 1 living room scene to the Act 2 backstage scene - and back again - even on the tiny Opera House stage. It's a marvel.

This performance, definitely one of Woodland's better shows, isn't to be missed.
Posted by Bev Sykes at 3:19 PM