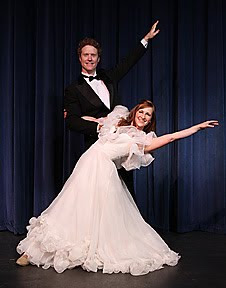 When 'Crazy for You' opened on Broadway in 1992, New York Times critic Frank Rich said it was '...the moment at which Broadway finally rose up to grab the musical back from the British.'

He went on to describe the show as 'the American musical's classic blend of music, laughter, dancing, sentiment and showmanship, with a freshness and confidence rarely seen during the 'Cats' decade.'

With music by George Gershwin and lyrics by Ira Gershwin, both of whom died before this show was developed, one could hardly call 'Crazy for You' a 'new' show, musically. But Ken Ludwig, who wrote the book, nonetheless described it as a 'new Gershwin musical comedy,' and Broadway fell in love with it.

Davis Musical Theatre Company is closing out its 25th season with a gala production of 'Crazy for You': a show that pulls out all the stops, with a cast of 33 and an orchestra of 19.

The near-capacity opening night audience laughed, cheered and applauded long and loud throughout the show; clearly, everybody was having the time of their lives.

The story is very loosely based on the 1930 musical, 'Girl Crazy' - made into a perfect movie vehicle for Judy Garland and Mickey Rooney in 1943 - although enough plot elements have been changed, and enough additional Gershwin songs added, to make this a show unto itself, with only faint echoes of what went before.

Bobby Child (Joseph Boyette), the spoiled son of a rich banking family, has no interest in banking and only wants to get into show business. He's trying to audition for the famous Bela Zangler (Mike Ball, playing an obvious reference to Florenz Ziegfeld). Alas, the showman is underwhelmed by Bobby's talents, and his mother (Dannette Vasser) insists that he give up his dream of stardom and settle down into the family business.

She sends him off to Deadrock, Nev., to foreclose on a rundown theater.

Boyette is a gem, and he brings great energy and sparkle to the role. In one scene, at a bar in Deadrock, you'd swear he was channeling Mickey Rooney, so perfect are his body movements.

Vasser is a powerhouse, and clearly the matriarch of the Child family.

Once in Deadrock, Bobby immediately falls in love with Polly Baker (Danielle Hansen), whose father owns the theater that is scheduled for foreclosure. Hansen is very sweet, although she lacks the lungs to give the role a lot of oomph. Still, she and Boyette play well off of each other.

The villain of the piece is Lank Hawkins (Nick Thompson), who owns the saloon adjacent to the theater and has his eye on expanding. He's also sweet on Polly, and sees Bobby as a threat to both plans.

Nine 'Follies girls' are led by Tess (Wendy Young), on whom Zangler has his eye; they're joined by 10 cowboys/miners. Of these, Moose (Kyle Hadley) is a genuine crowd pleaser, especially when he takes to the bass with 'Slap that Bass.'

That said, this isn't a perfect production. While the 19-piece orchestra is nice, the musicians aren't always on pitch. A trio of cowboys struggled with their own pitch, especially in 'Bidin' My Time,' and Friday's opening night performance suffered from a few technical glitches.

Overall, though, this delightful production is a perfect way to end the season.
Posted by Bev Sykes at 3:00 PM

Labels: "Crazy for You", DMTC, musical