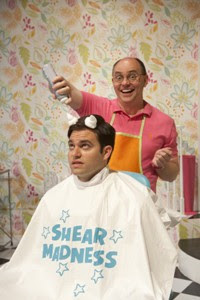 Is “Shear Madness,” the new offering at Sacramento’s Cosmopolitan Cabaret (replacing “My Way,” the Sinatra show), a bad play, or a very good cabaret show? Well...yes to both. Seen as a play, even a comedy, it’s not very good. It’s full of eye-rollingly bad/good puns, situations where the actors break each other up frequently, excessively loud delivery, and a plot that has more holes in it than Swiss cheese.

But as a cabaret show, it’s great. It involves lots and lots of audience participation, and the gang in the cabaret audience on opening night seemed to be having a wonderful time and laughing uproariously.

There’s no doubting, however, that it truly is sheer madness.

The show dates back to 1976 when Bruce Jordan discovered a German play called “Scherenschnitt,” by Paul Pörtner, which had been written to use as a study of how people perceive or misperceive reality.

Jordan was intrigued by the concept of the script and suggested that he and writing partner Marilyn Abrams stage the play at a dinner theater in New York. The play continued to evolve for two years until they finally brought it to Boston, where it began a thirty year run, 23 years at the Kennedy Center in Washington, DC and other record-breaking productions all over the country.

The plot, such as it is, is part script, and a lot ad lib, so that the lines blur and it’s hard to tell if the characters are breaking up because of something unexpected another actor did, or if it’s written into the script. Unlike improv, where the actors must invent entire scenes and characters from audience suggestions, these actors perform short vignettes, based on responses they get from the audience. One has the feeling that there is a repertoire of responses to every conceivable audience comment and jokes are performed with good comic timing.

The script is riddled with both local and timely social and political references (though they need to update their reference to “Desperate Housewives,” as it appears to be a season or two old).

The setting is a midtown beauty salon and the characters are as stereotypical as you can get. The owner of the salon is Tony Whitcomb (Neil A. Casey), who is Very Gay; the dumb hairdresser is Barbara DeMarco (Lindsey Alley), the snooty matron is Mrs. Eleanore McClatchy Shubert (Jamie J. Jones), the suspicious Brit is Eddie Lawrence (Lol Levy) and the two police officers (who know a surprising amount of information about everything even before they begin their investigation) are Mikey Thomas (Ryan Pratton) and Nick O’Brien (Gary Alan Wright).

The never seen Isabel Cheney is Tony’s landlady. She’s an aging concert pianist (“she played at the Firehouse in Old Sac when it was just Sac”) about to stage a come-back, despite a terrible breakdown she suffered during a concert many years ago. She appears to have had some sort of problem with every character in the play, so predictably, Isabel is murdered and everybody is a suspect.

A good portion of the first act is spent eliciting information from the audience, to see how much they remember of what happened up to the point of the murder. There is opportunity for the audience to question the cast at intermission and the revelation of the murderer is dependent on audience vote, so there are four possible endings and the show may change each night.

The real secret is that whodunnit doesn’t really matter. It’s the journey of discovery that is at the heart of this comedy and if the audience gets into the spirit of the thing, it can be a very enjoyable journey indeed.

“Shear Madness” is a zany evening of fluff and laughter and sure to please the audience. Be advised that table service for drinks and snacks, which has been available for all shows prior to this one, seems non-existent this time, so if you want something to eat or drink at your table, buy it on the way in.
Posted by Bev Sykes at 8:41 AM