Back in the Barnyard (Feature Article) 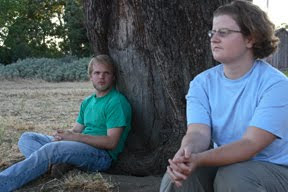 Barnyard Theater, the charming, quirky group that performs out at Schmeiser's Barn on Road 31 every summer, is back for its seventh season.

'It's exciting!' said co-founder Stephen Schmidt. 'It doesn't feel like seven years, but when I think of all the shows we've done, I realize it's a lot.'

Schmidt has directed everything in Barnyard's history until now, but is taking more of a backseat role this year.

'Lyndsay Carpenter is directing this time,' he said. 'As an organization, we're trying to do more and trying to have more people involved. We want lots of people filling lots of roles. Lindsay has been involved in Barnyard Theater since 'Galileo' in 2007, but this is the first time she has directed a full production.'

Carpenter has taken on an ambitious project for her directorial debut. This season, instead of offering the usual single play, the company is doing three new one-acts.

'I've been acting since I was 9 years old,' Carpenter said, 'mostly with the Davis Musical Theatre Company, but also with Acme and Barnyard Theater. I also did some high school productions. And last semester, at Tufts University, I directed a 10-minute piece.'

But there's a big difference between directing a 10-minute piece and directing three one-acts, she realizes.

'In the past, I showed up and was told what to do. Now I have to know what I'm doing. I have to be ready to make decisions. A lot more goes on than I ever realized. There've been challenges, but it's nice, because I'm not allowed to not come up with solutions. I have to work through them, because nobody else will.'

Carpenter's directorial debut is in keeping with the company's goal of promoting new talent in all sorts of roles, but still with a safety net of the old timers.

'I've been at most of the rehearsals, and I'm there to provide support and guidance,' Schmidt said. 'It's a cool relationship. I'm functioning more as an artistic director, which is new for me. I enjoy both the artistic and technical sides, but I really like it when I can combine the two and make them work together.

'One thing Barnyard Theater does well is have the tech crew support shows in ways that sometimes don't happen in other companies.'

Over the years, Barnyard Theater has used many interesting technical devices to add to the fun of their shows, perhaps the most memorable of which was during 2006's 'A Flag Touched the Ground.' Instead of having a scene change, the entire platform on which the audience was seated rotated, when it was time for a new scene.

Schmidt promises new tricks this year, as well, but won't go into detail so as not to ruin the surprise.

The decision to perform three plays instead of one came about in conference with company member and playwright Brian Oglesby, about how audiences rarely see fully produced short plays. Then, too, fresh challenges are involved.

'They don't take less production than a full-length play,' Schmidt said. 'We still have to create all the worlds. Production-wise, directing three short plays is the same as directing three long ones.'

The three original one-acts will make use of the unique performance space in and around the working barn, to tell stories about love, relationships and memories.

Rob Rinow's 'Unusual Epitaphs' - opening the evening's entertainment - is a 10-minute piece about a longtime traveler with no roots, who wants to be remembered for being eaten by a bear. He meets a lonely security guard/tour guide/shindig planner whose roots are too deep to break free.

'It's a really heartwarming piece that will start out in the arena outside the barn, facing west, just before sunset,' Schmidt explained. 'As the audience watches the piece, it'll end at sunset.'

Then, in the barn itself, Eva Konstantopoulos' 'Fly Me to the Moon' will present a husband and wife trying to buy themselves the perfect memory: a trip to the moon.

The evening's final play, Brenda Varda's 'Things That Fall From the Sky,' tells the story of Melvia, a young woman whose preoccupation with the Columbia space shuttle disaster changes her relationships with her astronaut brother and astronomer boyfriend.

'Unusual Epitaphs' and 'Things that Fall from the Sky' were read aloud during an earlier season of Barnyard Theater's 'Night of New Plays,' which the company presents each year as unstaged debuts.

Following the plays, audience members are invited to stay for star-gazing in the barnyard. Patrons are reminded to bring sweatshirts in case of chilly weather; bug spray will be provided. Parking at the barn is limited this year, so carpooling is strongly encouraged.