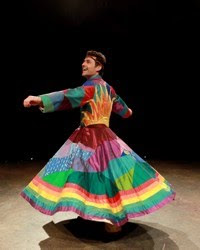 The Music Circus doesn't exactly have a 'cast of thousands' for its outstanding production of 'Joseph and the Amazing Technicolor Dreamcoat,' but with 48 members of the Music Circus Junior Company for starters - along with a large adult cast - the play puts about 75 people on stage.

Director/choreographer Richard Stafford has chosen to present the Andrew Lloyd Webber/Tim Rice musical closer to its original format than is generally seen.

Webber was only 19 years old when he was asked to write a piece for a local school choir, to sing during an Easter service. He asked his friend Tim Rice (then 22) to write the lyrics, and the two settled on the Genesis story of Joseph and his coat of many colors. As originally performed by those children, the work was only 15 to 20 minutes long.

After a number of additions, changes and performances by amateur companies, the full production of 'Joseph and the Amazing Technicolor Dreamcoat' opened on Broadway in 1982.

The first Music Circus production of 'Joseph' appeared just one year later, in 1983, with Jimmy Osmond in the title role. (His brother Donny starred in the film version, made a few years later.)

Although 'Joseph' originally was written for a children's choir, that element wasn't added back into the play until the 1991 London Palladium production; a children's choir subsequently became a feature of the U.S. touring company. This 2010 Music Circus production is the first time the original musical score - with choir - has been presented in Sacramento.

Jennifer Paz, as the Narrator, starts the show off with the young people's chorus. Paz starred as Kim in the first national tour of 'Miss Saigon,' and she played both Cosette and Eponine in Broadway's 'Les Miserables.' She brings genuine sparkle to this role, and interacts well with the children. She's a real treasure.

Max von Essen reprises his title role performance from the 2003 Music Circus production of this play. He's a local favorite for his roles in 'Sweeney Todd,' 'Cabaret' and 'Jesus Christ Superstar,' and most recently was seen in Sacramento in the touring company of 'Xanadu.'

Once again, von Essen gives us a strong, commanding Joseph.

The story is the whimsical tale of Joseph, favorite son of Jacob (Paul Ainsley), who is singled out from his 11 brothers and given a colorful coat by his father.

His jealous siblings gang up on him, take away his coat and sell Joseph into slavery. The torn coat is dipped in sheep's blood, and Jacob is brought the sad tale of his son's demise.

Joseph becomes the slave of Potiphar (also played by Ainsley) until his wife (Naomi Kakuk) seduces the young slave, who then is thrown in jail. He then begins to interpret the dreams of the butler (Michael McGurk) and baker (Aguirre) employed by the Pharaoh (David Engel). Joseph's skill brings him to the attention of the Pharaoh himself, who also suffers from confusing dreams, and who appoints Joseph as his No. 2 man to get Egypt through an approaching drought.

That this grim tale could be told in such an entertaining manner is surprising. But with lyrics like 'And when Joseph tried it on, he knew his sheepskin days were gone,' how could it be anything but charming?

Joseph's brothers have some of the best musical numbers in the piece, especially the wild hoedown of 'One More Angel in Heaven' and the 'Benjamin Calypso' (which highlights Lain Gray's Judah).

Engel's Pharaoh makes a memorable entrance, and when he takes microphone in hand to sing ... well, he's a true 'king' in every possible sense of the word.

Richard Bay, who surely must be 120 years old by now, designed the animal puppets used in this production. I've enjoyed Bay's whimsical puppets for as long as I've lived in Davis, and was delighted to see his camel meandering across the stage.

Marcy Froehlich's costumes - particularly for Joseph's coat, the Pharaoh and his entourage, and the Las Vegas show girls - are outstanding.

The Music Circus has an ingenious arrangement of lifts to raise and lower various parts of the stage, at different points in time; the entire stage also can turn.

I haven't seen such an imaginative use of a lift system for a long, long time; this added greatly to the show.

'Joseph' never fails to delight, but this production delights a bit more than most.
Posted by Bev Sykes at 1:02 PM