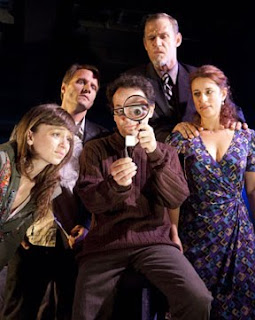 What do we see? Probably a nerdy sort of guy, with horn-rimmed glasses, sitting quietly in a corner while surrounded by books, magnifying glasses, tweezers and other tools of the trade.

Be prepared to have these stereotypes blown away by the Capital Stage production of Theresa Rebeck's dark comedy, 'Mauritius,' which continues through Nov. 7 in Old Sacramento.

The play is directed by Michael Stevenson, who delivers a beautifully crafted and swiftly paced production.

For starters, Stephen C. Jones has created the perfect setting for a hole-in-the wall stamp store.

As the play begins, Philip (John P. Lamb) stands hunched over the display case, reading a book; he's everything you'd expect from a stamp dealer. Dennis (Kurt Johnson), a large man, sits with his legs up on a table, also reading.

Kristine David so perfectly embodies Jackie, an innocent young girl, that one could almost believe she'd been touring the halls of the Delta King, and happened to accidentally open a door onto the stage, and stepped into this production.

Jackie is carrying a thin book: Her mother has recently died and left her a stamp album. (My only quibble with this production is that the book seems terribly thin to represent a lifetime's collection of stamps.) Jackie is in some financial difficulty, and has heard that some of the stamps might be worth a lot of money; she wonders if someone will appraise them for her.

Grouchy Philip wants nothing to do with her, but Dennis is curious; he takes pity on her and agrees to check out the stamps. He points out an 'inverted Jenny,' which he tells her may be worth as much as $3,000. He continues to turn the pages until he stops suddenly.

Obviously, he has seen something, and doesn't want to let her know about it. Dennis abruptly shuts the book and tells her to go home.

After she has left, we learn that he has seen the 1847 one-penny and two-penny 'Post Office' stamps, printed in very limited quantities on the island of Mauritius - off the east coast of Madagascar - and prized for the mistake that led them to be printed with the words 'post office' instead of 'post paid.'

The stamps could be worth millions ... if they're authentic.

'There are so many forgeries floating around out there, people are starting to use them to mail in their absentee ballots,' Dennis tells Philip. 'Besides which, how would you know the difference? You can't, because you don't know!'

And so the con is on.

Dennis meets Sterling (Jonathan Rhys Williams), an uber-rich international arms dealer and die-hard stamp lover, and together they scheme about how to get the stamps from the clueless Jackie.

But then a wrinkle erupts: Jackie's possession of the collection is questioned. Her estranged half-sister Mary (Lauren Bloom), who has returned to help clear out the family home after their mother's death, claims the album for her own.

Mary insists that her grandfather - no relation to Jackie - was the collector, and Mary has fond memories of spending time with him, while learning the history of the stamps.

She wants to keep the album, not sell it.

No love is lost between these two women, and possession of the stamp collection becomes more of a power struggle than a money thing.

After many twists, turns and deception, Rebeck uncorks an ingenious conclusion that should satisfy just about everyone.

This is an outstanding show with a strong cast, most of whom are new to Capital Stage. The sole company regular, Williams, is almost unrecognizable as the thug Sterling: certainly a far cry from his role in last spring's 'Hunter Gatherers.'

Philately rarely has been this much fun.
Posted by Bev Sykes at 11:47 PM