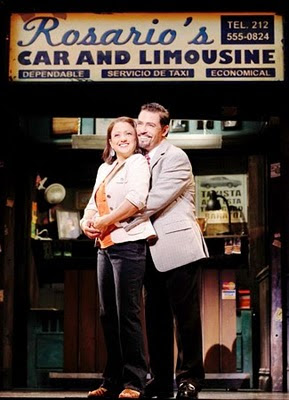 For people who feel that nobody is writing the big Broadway musicals anymore (other than those churned out by the Disney machine), I would suggest that they get themselves to the Sacramento Community Center to see 'In the Heights,' winner of four 2008 Tony awards and the 2008 Grammy award for best musical show album.

This is a big, high-energy musical, conceived by Lin-Manuel Miranda (who also wrote the music and lyrics), with lots of likeable characters, a fantastic set by Anna Louizos, great choreography by Andy Blankenbuehler, and a message of hope and self-discovery. The score features hip-hop, salsa, merengue, Latin pop and soul music.

OK - it's loud and sometimes difficult to understand, but you get the general gist of the story and have plenty to watch while you enjoy the action on stage. The second act begins wrapping things up almost from the first number and it all seems over very quickly, but again, it's the whole experience that counts and the experience here is definitely worth it.

The story itself covers three days in the life of this primarily Latino Upper Manhattan neighborhood, and revolves around the lives of several of its characters.

The title song, a hip-hop number, is sung by Usnavi (Joseph Morales), the owner of a small store in Washington Heights. Usnavi (he was named after one of the first sights his parents saw when the arrived in America - a U.S. Navy ship) is the narrator of the piece and Morales has a charm that easily grabs the audience.

Usnavi is in love with Vanessa (Lexi Lawson), who works in the beauty shop next door, but who is desperate to move out of the Heights and away from her dysfunctional mother and the other problems she associates with the neighborhood. A bad credit score is making that dream difficult.

Nina (Genny Lis Padilla) has come home from her first year at Stanford, having to tell her parents Kevin (Danny Bolero) and Camila (Natalie Toro) that she has lost her scholarship and dropped out of school. Padilla gives a beautiful performance.

Nina is also falling in love with Benny (Nicholas Christopher), an employee of the taxi and limousine business owned by her parents. But Benny is not from a Latin culture, can barely speak Spanish, and Kevin sees him as not good enough for his daughter.

Kevin and Camila have been building the American dream since Kevin decided he was not going to follow in the footsteps of his farmering father and grandfather. His dream is to earn enough to give his daughter a college education so that she, too, can eventually move up in the world. His solo, 'Inutil' was gut-wrenching.

The heart of the neighborhood is Abuela Claudia (Elise Santora), everybody's spiritual grandmother, but especially to Usnavi, whom she practically raised. Abuela Claudia taught Usnavi the value of paciencia y fe (patience and faith), also the title of her big musical number.

She also has a special tie to Sonny (Chris Chatman), Usnavi's impish young cousin who works in the store, but who is always there to push Usnavi to think positively about the good things in his life.

A winning lottery ticket features prominently into the plot, and a prolonged power blackout leaves most of Act 2 to be played in dim light, which brings out both the good and the bad in the neighborhood.

Special recognition April Ortiz, playing Daniela, the owner of the hair salon where all the neighborhood gossip takes place and David Baida, as the Piragua Guy, a street vendor with a powerful voice.

'In the Heights' is not a perfect musical but its shortcomings are far outweighed by its strong points. A major musical set in a Latino community has been long in coming and was worth the wait.

And there's not a single cartoon character brought to life in it.
Posted by Bev Sykes at 10:19 AM